The girl who was strip-searched aged 12 by police

The girl who was strip-searched aged 12 by police 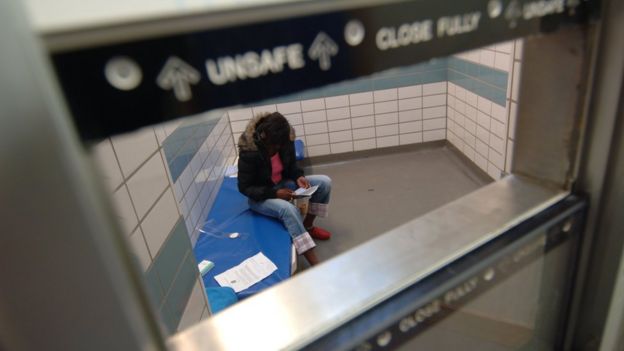 They were “horrible and demeaning”, Georgia Wood says of the police officers who strip-searched her when she was just 12 years old.

She remembers being taken into police custody in south Wales eight years ago by officers who suspected her mother of possessing drugs.

“They didn’t explain to me until we got to the police station. And they literally just said ‘this is what’s going to happen and we’re going to do it’.”

“And I really didn’t feel respected in that situation.”

No drugs were found on Georgia, now aged 20, or her mother Karen Archer – who was never charged with an offence.
South Wales Police said officers admitted they had mistakenly carried out a strip search without an appropriate adult present and two officers had received management action.

Karen and Georgia, who live near Swansea, have since been awarded compensation for their ordeal.

According to figures released by 13 police forces in England and Wales, more than 5,000 children aged 17 were strip-searched between 2013 and 2015.

More than 4,000 of those searches – which are normally used to detect drugs or concealed weapons – were carried out in London by the UK’s largest force, the Metropolitan Police.

In total across suspects of all age groups, the same 13 forces carried out 113,000 searches in the last three years that involved the removal of more than a suspect’s outer clothing – which is the precise definition of a strip-search.

5 live Investigates asked all 45 police forces in the UK for strip-search figures, but only 13 responded with information.

As well as the Met, they were Lincolnshire, Northamptonshire, City of London, Cambridgeshire, North Wales, Bedfordshire, Nottinghamshire, Cumbria, Essex, Cleveland, Hertfordshire and Lancashire.

The search should not take place in an area where people, including anyone of the opposite sex, can watch

“Marion” – not her real name – says she was handcuffed, pinned to the floor, and had all her clothes cut from her body by female officers at a London police station.

She says male officers stood at a nearby open door while she was naked on the floor, before she was later “paraded through the station” in just a paper suit.

She was 24 when she had been taken into custody while trying to help a young man she saw being arrested.

“I was pinned to the ground with three officers on me. It felt like there were more than that because they were grabbing me from all sides.

“They were also talking with male officers who were standing at the open door. They were chatting together about what implements to use on me, like leg restraints, scissors, things like that”.

Marion said the officers were “making jokes to each other” about the benefits of strapless bras.

“They were saying things like, ‘there’s a good girl’ which I found really humiliating.

“Once they had me completely naked they put me into a paper suit which didn’t do up properly so my breasts were exposed and they paraded me like that through the station then dumped me on the floor of another cell.”

She was subsequently found not guilty of obstruction and two charges of assaulting police officers.

The Metropolitan Police said two officers were dealt with under misconduct regulations for failure to maintain adequate records.

“The complainant appealed the Met’s decision to the IPCC [Independent Police Complaints Commission]. This appeal is currently under consideration,” it said.

It said: “Strip-searching is a vital power in police custody to not only identify and seize evidence but also to ensure the safety and security of all detainees and staff.

“Each search must be based on an objective assessment of the need and proportionality to search the person to that extent. Legal safeguards are applied to ensure the welfare needs of the detainee are considered and met.”

“I think this is quite concerning because we know so little about why so many strip-searches are taking place,” she said.

“It’s really distressing for people and I think the thing about a strip-search is, it is so intrusive, for especially if you’re talking about children or teenagers.

“That’s why this should never be done lightly and the police need to understand the impact this can have on individuals and why it has to be justified.”

The Home Office has set up a working party to establish whether extra safeguards are needed to ensure that strip-searches are being carried fairly and with adequate supervision.

A spokesman said it was committed to giving the police the “necessary tools” to do their job.

“But the use of all powers warrants proper accountability and transparency. We are currently considering whether additional safeguards are required when police conduct searches requiring the removal of more than outer clothing.”

You can hear more about this story on 5 live Investigates at 11:00 GMT on Sunday 30 October