These Five Trends In China Will Change The Gold Market

These Five Trends In China Will Change The Gold Market

Apple spent about five years developing the iPhone, which has changed the smartphone market forever. Until the release, however, nobody could imagine what impact the iPhone would have on the market.

And most consumers didn’t know about it at all.

The same thing is happening with China and gold right now. The gold market will soon be very different than from what we see today – largely due to the current developments in China.

China’s influence will impact not just gold investors but everyone who has a vested interest in the global economy, stock markets, and the US dollar. After all, China will be a dominant force in all, as most analysts project.

(Hedge fund manager Dan Tapiero talks about some of these trends in his short interview, especially the #5 listed below.)

Gold fixing was historically held at the London Bullion Market Association (LBMA). China was not part of that process, so it started its own pricing benchmark.

The Shanghai Gold Exchange’s program includes 12 “fixing” members, 10 of which are Chinese banks. The new gold benchmark will better reflect local market flows and, just as important, reduces gold’s price dependency on the US dollar.

The program has profound implications as the gold trade continues to move from West to East. It will increase China’s influence over the gold price and expand the yuan’s role as a global currency.

The Chinese bank now bids prices with HSBC, JPMorgan Chase, Bank of Nova Scotia, Toronto Dominion Bank, and UBS. That means China now has direct influence on the price of this key industrial and monetary metal.

These two moves makes sense, since some of the world’s top gold and silver consumers are in the East—India, Russia, Turkey, and of course China.

It is clear China wants more influence over gold and silver prices—and now it will get it.

Trend #3: The renminbi is in the IMF basket

Last November, the IMF added the renminbi to its reserve currency basket. The prestigious basket will include the yuan along with the dollar, euro, pound sterling, and yen when calculating the value of the Special Drawing Rights (SDRs).

The long-term implication is that the yuan may one day become as recognizable as the dollar or euro.

It also means China must accumulate enough bullion reserves to stand on the world stage. And by any measure, it doesn’t have enough.

Some analysts believe China has more than the official 1,797.5 tonnes it reported in March, but that amount is 4.5 times less than 8,133.5 tonnes the US holds. Even if China doesn’t want that much, the current total represents only 2.2% of its total reserves.

This means that not only does China need to continue buying gold in massive quantities, it will at some point need to announce it holds a much higher amount. And that announcement will light a fire under the gold price.

You may not trust the numbers coming out of Beijing, but keep in mind that China’s biggest goal is to become a first world economy. It wants to be on the same footing as the US, Japan, and Europe.

And one way to achieve that is to accumulate a lot more gold.

China produces more gold than any other nation. 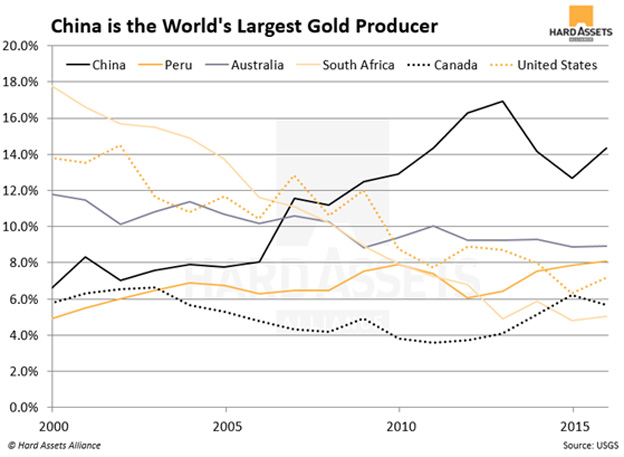 But even the world’s top producer isn’t immune to the effects of the four-year bear market in gold. Mine production is slowing and is poised to decline for at least several years just like everywhere else.

That’s because the cost of production has risen, ore grades are falling, and reserves in the country are limited.

And get this: China doesn’t export gold in any meaningful amount. So whatever gets produced there, stays there.

Bottom line: China’s gold production won’t make it to world markets. Its output is in decline and won’t be available to meet global demand.

Trend #5: Lack of other alternatives for Chinese investors

This trend is explosive…

As hedge fund manager Dan Tapiero points out, Chinese investors will be increasingly attracted to gold because they won’t want their savings at a zero percent interest rate.

Yet, Beijing has made it clear that it will bring rates lower. So what will investors buy? Government debt yields just 1–2%. High-yield corporate debt pays more, but only 15% of Chinese debt is rated by foreign agencies like Moody’s and S&P, so it comes with a lot of potential credit risk. The stock market wiped out many investors, and real estate petered out.

Deterioration in China’s macro backdrop could trigger flows towards gold; there are a limited number of investment alternatives and gold is poised to benefit should outlooks across the different options turn sour… rotation into gold ETFs would be a relatively easy switch for local equity investors and could gain further traction if equity markets continue to weaken.

Chinese savers have huge exposure to a devaluation of their currency, as their wealth is tied directly to the fate of the renminbi. Devaluation fears have prompted massive capital outflows from both the currency and the country—some of which is fleeing into gold.

Looking at the big picture over the next 3-5 years—these changes signal that China will be a big driver of the gold price.