But the USDA spends 6 times more focus on protein

Do you find yourself often eating junk food because it’s less pricey than food which promotes optimal health? A new study published this week by researchers at Harvard University found that lowering the price of fruits and vegetables is key in preventing people from dying of heart attack and stroke. 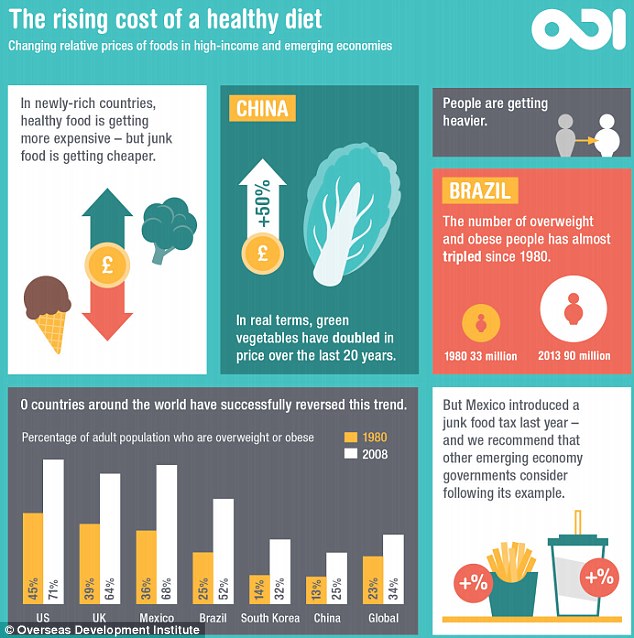 One of the reasons so many people are suffering from obesity and overall weak health is because healthy food can cost so much more than cheap junk. Fat- and sugar-laden fast food and junk food is often far cheaper than healthy food. Though as the population ages and, sadly, gets a little wider and less healthy, the government is more likely to lend a hand in solving the health crisis. But the answer might be much simpler than the the government would like to admit, as the new study suggests.

The research, which was presented at the American Heart Association’s (AHA) Epidemiology NS Lifestyle 2016 scientific meeting, shows that lowering the price of fresh produce just 10% and increasing the price of unhealthy food by the same amount can cut deaths due to cardiovascular diseases by 1.2% in 5 years, and about 2% in 2 decades. Similarly, heart attacks and strokes would be reduced by 2.6% and 4%, respectively, in 2 decades.

Additionally, the scientists found that slashing the cost of grains by 10% might lead to a 0.2% reduction from heart diseases in 5 years and 0.3% in 20 years.

The findings also suggested that by raising the cost of sugary drinks by 10%, there could be a reduction in deaths caused by heart-related diseases by almost 0.1 percent in 5 years and 0.12 percent after 20 years. [1]

In total, lowering the price of fruits and vegetables by 30% could save nearly 200,000 lives over 15 years. That’s roughly the population of Des Moines, Iowa.

Fiddling with the price of fruits and veggies would be more effective at saving lives than traditional campaigns aimed at getting people to eat healthier, too, the scientists’ computer models showed.

Lead researcher Jonathan Pearson-Stuttard, an academic clinical fellow at Imperial College in London, told NPR that lowering prices translated into better health all the way around, regardless of age, gender, race, and ethnicity.

“Poor diet is a large contributor to cardiovascular disease, which is the biggest killer in the United States. Governments must therefore implement effective dietary policies to tackle this growing burden. Both mass media campaigns and achieving price reductions of fruits and vegetables are important tools in achieving this.”

In the United States, heart disease is the #1 killer of both men and women, killing close to 1 million people each year, according to The Heart Foundation. Active adults who consume a 2,000 calorie diet should be getting at least 4.5 servings of fruits and vegetables a day.

Speaking at the presentation, Dr. Dariush Mozaffarian, dean of the Friedman School of Nutrition Science and Policy at Tufts University and the study’s principal investigator, said this:

“Strategies that increase the awareness, availability and affordability of healthy foods such as fruits and vegetables should be harnessed and adopted by the U.S. Further, policies aimed at subsidizing fruits and vegetables could have more equitable effects upon health across race and ethnic groups. And crucially, this can be achieved quickly.”

All the posters, health class videos, and campaigns in the world won’t help if people can’t access fresh, affordable food.

According to Elizabeth Pivonka, president of Produce for Better Health Foundation, a nonprofit group that works to increase fruit and vegetable consumption, says solving the issue is less about shifting crop subsidies from corn and soybean to broccoli and oranges, and more about the USDA spending more money funding fruits and vegetables.

In looking at the USDA’s spending on subsidy programs, promotional programs, research education and more, Produce for Better Health said in its 2015 Gap Analysis Report that the department didn’t match with its own dietary guideline recommendations. 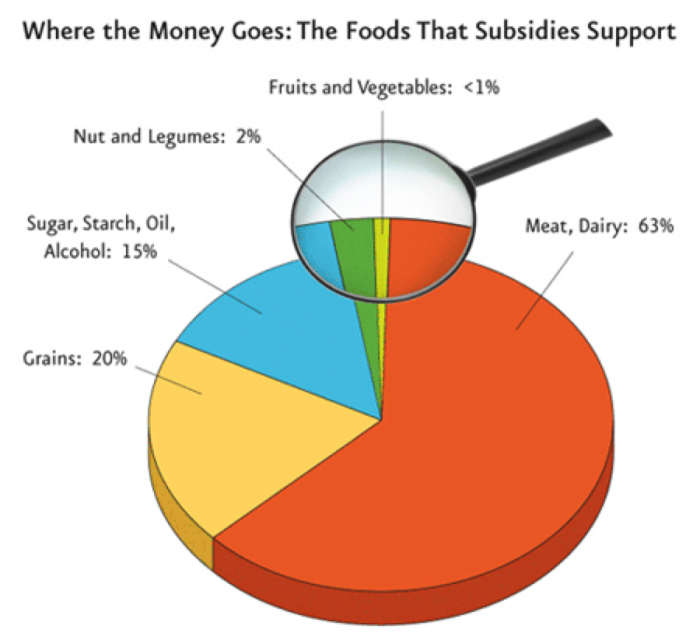 Pivonka said the government “doesn’t put as much funding into fruits and vegetables,” and actually spends “6 times more on the protein group.” [3]