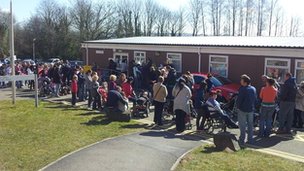 About 1,700 people have received vaccinations against measles at four emergency clinics for the MMR jab held in hospitals across south Wales.

Health officials said demand for the vaccine was 50% higher than anticipated at the hospital drop-in sessions.

The measles outbreak, focused on Swansea, has affected nearly 600 people so far in south, mid and west Wales.

More sessions will be held next Saturday for those unable to have the jab at a GP surgery during the week.

The sessions were held from 10:00 BST to 16:00 BST but people began waiting at one hospital, Morriston in Swansea, an hour before the doors opened.

By early afternoon the local health board said about 800 vaccinations had been administered but by the end of the day health officials said they expected staff at the four sites to have inoculated hundreds more children and adults.

Sessions were also being held in Neath Port Talbot and Bridgend.

Although aimed primarily at children, the vaccinations were available for anyone born after 1970 who had not had measles or been inoculated against it.

The latest figure shows 47 new cases of the disease since Wednesday, although this is less than half the increase of the previous week.

Before the introduction of the MMR (measles, mumps and rubella) vaccination in 1988, about half a million children caught measles and about 100 died from it each year in the UK.

But concerns over the jab’s safety were raised a decade later when surgeon Andrew Wakefield published a since discredited paper in The Lancet suggesting MMR was linked to an increased risk of autism.
Media coverage

For children in England reaching their second birthday it rose to 91.2% in 2011-12, but that is still below the World Health Organization target of at least 95%.

MMR jab clinic queue at Morriston Hospital Health officials have had to restock vaccines due to the high level of demand, such as at Morriston

Wales figures for October to December 2012 show 94% uptake of the first dose of vaccine, with local authority uptake ranging from 87% to 97%. Uptake of the second dose by five years of age increased to 90%, from 89% in the previous quarter.

Public Health Wales has attributed the slowdown in the spread of the disease in the current outbreak to a rise in the number of people being inoculated. But it has warned that 3,800 children have still not had both doses of the MMR vaccine.

It said just 600 in the Abertawe Bro Morgannwg University Health Board area received the jab in the past week.

That figure does not include children who are vaccinated as normal at 13 months and three years four months.

Public health officials urged parents of unvaccinated children to attend the sessions at Morriston and Singleton hospitals in Swansea, Neath Port Talbot Hospital and the Princess of Wales Hospital in Bridgend.

Officials have said it is “just a matter of time” before a child is left with serious and permanent complications, such as eye disorders, deafness or brain damage, or even dies.

Typical symptoms of measles include fever, cough, conjunctivitis and a rash. Complications are quite common even in healthy people and about 20% of reported measles cases experience one or more complication.

These can include ear infections, vomiting and diarrhoea, pneumonia, meningitis and serious eye disorders.

Abertawe Bro Morgannwg University Health Board said no appointments were necessary at the drop-in vaccination clinics and while they were targeting children and adolescents who had not had their scheduled MMR jabs, no-one would be turned away, including adults.

Some GP surgeries have also responded to the epidemic by offering extra clinics for the MMR vaccine.
Measles graphic

Dr Marion Lyons, director of health protection for Public Health Wales, said: “I’m hopeful that through our collective efforts and with responsible parents getting their children vaccinated we can minimise the risks to children from this dreadful disease.”

Although the epidemic is based on Swansea, cases continue to be reported across Wales.

The majority are in Abertawe Bro Morgannwg, which as well as Swansea also includes Neath, Port Talbot and Bridgend; there are also cases in Powys and the Hywel Dda Health Board area, which covers Carmarthenshire, Ceredigion and Pembrokeshire.

Meanwhile, the number of confirmed cases of measles across north-east England has reached 200 since September 2012.

The Health Protection Agency (HPA) has already declared the outbreak one of the worst in recent years.

There have been 200 confirmed and 176 suspected cases in north-east England, compared to just 18 confirmed in 2011.