UHM – Intelligence Report #1 WORLD WAR III IS ON THE WAY

Erard Mangoux and his Direction Générale de la Sécurité Extérieure along with French President, Francois Hollande may be about to pull a Knight of Malta, Tony Blair special with a weapons of mass destruction lie just like in 2003. The last time this occurred with Tony Blair & George W. Bush (Deutsche Verteidigungs Dienst) it was based on purposely false information fed by the British Secret Intelligence Service front company called Hill & Knowlton then based in Niger with the Yellowcake dossier.

Shortly in the media you may be again subjected to a propaganda bombardment along the same lines as in 2003. Instead of Iraq, this time it will be Iran and not Syria as some might have thought. The DGSE have started to claim that Iran has hold of four nuclear devices. What did Tony Blair say about Saddam Hussein? He told us all that Saddam could hit the western hemisphere with weapons of mass destruction missiles within just forty-five minutes. This was of course a complete and utter pathetic lie just to keep the petrodollar afloat as well as for the theft of the regions energy reserves and a strategic base for the U.S. and NATO terrorists in the region ready for the New Middle East plan of Bernard Lewis.

I should remind you that the Central Intelligence Agency and the British SIS tried desperately to put weapons of mass destruction into Iraq in order to back up their false campaign. An operation commanded by the American-Turkish Council failed in placing WMD in the region and resulted in a shoot-out killing agents on both the good and bad sides of the coin. The American-Turkish Council is of course run by an ex-death squad CIA murderer by the name of Richard Armitage. You will notice how terrorist Turkey is hindering peace in the Middle East recently and especially with the NATO Patriot missile batteries being placed on the Turkish-Syrian border.

Recep Tayyip Erdoğan is a terrorist under the thumb of the even worse World government driven North Atlantic Treaty Organization (one of the real terrorists of the 9/11 electronic attacks). Erdogan along with most of the Middle Eastern leaders (except Iran) serve Jesuit trained Knight of Malta, King Juan Carlos of Spain, the Protector of the Holy Sites of the Latin Kingdom of Jerusalem. Nothing happens in the region without the say so and orders from the House of Bourbon, the commanders of The Worshipful Company of Apothecaries over Dope Inc and the drugs trade. Expect Turkey to be involved in any deceptions that may now come in the region.

So you thought the ancient Crusade was over? Wrong! The Crusade has continued to this very day and will for a few more decades yet. The same ancient orders are still commanding the assault on the Muslim World today as they were in ancient times. Leading the pack is of course the Order of Malta which controls all other recognized Knights of Malta orders through The Alliance of the Orders of St John of Jerusalem based in Geneva, Switzerland. Geneva is commanded by Prince Vittorio Emanuele IV the head of the House of Savoy and a strong Papist loyal to the Holy See and the Pope just like Juan Carlos and the House of Bourbon. Even Seymour Hersh has finally come to see who is really leading the pack over the military intelligence network.

The Papacy is conducting its power over the region through the veil of inter-religious dialogue and its Ecumenical movement and World Council of Churches system. Families such as the Pallavicini are embedded in the Islamic World in order to guide them under Rome. For instance Felice Pallavicini is a member of the Order of Malta and is pictured with his Maltese cape. How fitting for a Muslim to be part of the Crusaders themselves and using the name of Abdul Wahid. Take a look at the membership list of the World Council of Islamic Call and you will find him there. The Order of Malta back in 1988 was briefly commanded by, Lieutenant Giancarlo Pallavicini. 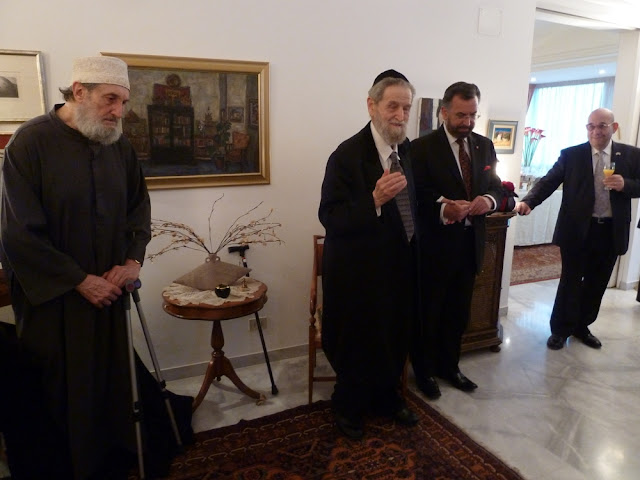 Felice Pallavicini at a meeting with the Samhedrin and Romans

I believe the House of Bourbon will be very upset with the delays in the planned attacks on the Middle East. Senior Executive Service proxy, Hillary Clinton has failed in her job has have many others like John McCain, Madeline Albright and Mikhail Gorbachev. All of these will be punished unless they step up to the plate and complete the desires of the Bourbons and quickly.

What we are witnessing right now in the Middle East is the complete humiliation of the West by both Al-Assad of Syria and Vladimir Putin of Russia. An attempted assassination of Putin took place late in August and he was rushed to Smolensk Regional Hospital. Unfortunately for British Intelligence, Vladimir Putin is now safe and well and has recently visited Turkey showing the World he is back. This would have been the third known assassination attempt on President Putin in recent years. The first time was planned from a secret British SIS headquarters in the United States based at the Hay Adams Hotel in Washington D.C.

The West is now a desperate rat who is cornered and now we are in a very dangerous situation indeed. Will the original plans of separate invasions one at a time continue or are The Worshipful Company of Horners about to kick off a major Middle Eastern conflict involving multiple nations? If so then we will be looking down the pike at World War III. The majority of which will be fought in the Middle East including at least two nuclear strikes involving both the West and a Russian-Sino operation. To me this is the only way out for the West. Syria and Iran have a military defense pact to protect one another. We may just see shortly a heated propaganda campaign for about three months at most before an attack on Iran. The recent removal of Iranian media such as PressTV from the airwaves in both Europe (Eutelsat) and the Americas (HispanTV) should give you a clue that an attack is very close. Iranian media cannot broadcast in a war time enemies nation which is relying on its own propaganda war on Iran in order to justify its unlawful attack and theft on the Middle Eastern nation.

This war will lead very quickly into a oil crisis the likes of which will have never been seen before. The Strait of Hormuz will be cut off immediately and very little oil will reach the West from the Organization of the Petroleum Exporting Countries system which Knight of Malta, Heinz Kissinger (Deutsche Verteidigungs Dienst) set-up (and also nearly lost recently to Gaddafi with his Golden Oil Plan resulting in The Worshipful Company of Mercers & Horners punishing Libya and brutally assassinating Gaddafi as a warning to others thinking of economic warfare). The light sweet crude oil stolen from Libya will act as a small buffer for oil but it cannot cope with the severe losses to come.

Have you asked yourself why in the amount of gasoline stations in the Britain have dropped from thirty-seven and a half thousand in the seventies to now just nine-thousand by 2011? The price of a barrel of oil will immediately hit $250 and may end up eventually at around $600 if the big events prolong themselves. The people of the World will be conditioned to this oil scarcity and high prices so much that when it is all over the Order of Malta will drop the price of oil to around $185-200 as standard. Compared to what it was during the events this will seem reasonable. No different to how people are conditioned to high gasoline prices now and then a small drop seems good and normal, all whilst they forget it was once half the price. Coal will become a vital energy source during times of oil problems. This is why the Vatican’s Le Cercle member, Margaret Thatcher screwed the coal miners in the U.K. The U.K. sits on a very large amount of coal which will come into play when the time is correct, no different to the secret massive oil wells in the U.S. and oil reserves of the Falkland Islands. The U.S. wells will be ready to come online from 2017 onwards. Margaret Thatcher was controlled by the Roman Catholic, Powell family who are very loyal to the Papacy and also powerful members of The Worshipful Company of Mercers.

The price of oil, crises and shortages of numerous economic needs will quickly bring about an economic collapse of the World’s financial system which is already insolvent and has been since September 2008. This collapse will then be veiled as being caused by the Muslim World and not by the previous planned collapse by the likes of the Order of Malta, Club of Isles, TheCityUK and the Mercers (their power over the Middle Eastern finance is through the Middle East Association headed by Matthew Smith). This will greatly aid the Strategy of Tension and the Clash of the Civilizations agendas. If a draft and conscription is bought about then masses of Western unemployed adults will sign-up immediately as they falsely believe the Muslim World has caused their technetronic lifestyles to be destroyed.

Right-wing fascism will take over very quickly as we are slowly witnessing right now. All as the Western World is turned into a post-democratic military Marxist dictatorship run by military dictatorships. Worldwide western military intelligence networks are now trying to foment racism and racial hatred amongst populations. They are stirring the pot in order to aid the massive internal problems to come in each of the nations. The London riots were a prime example of the attempts to start the conditioning ready for race riots and war to come out of ordo-ab-chao. Military intelligence patsies are all ready and waiting to be blamed for false-flag man-in-the-middle terrorist events to aid the scaremongering and agenda of the so-called War on Terror. Expect numerous terrorist campaigns on the mainland resulting in a further police state lock down and checkpoints almost everywhere you look and visit.

All eyes on the region of the Middle East now as we may soon be witnessing the final seventh war of the red Freemasonry. A war which will be used to aid the Club of Rome’s population reduction agenda. An agenda where sixty-percent of the Global populace will be destroyed by 2050 (one in two males to get cancer by 2027) and then a further 35% of the survivors will be destroyed by 2100. All these events are planned decades before and up to one-hundred and twenty years prior even. The scions of the planners execute the wishes of the ancestors within the new unHoly Roman Empire which was more out in the open after the 1814 Congress of Vienna and the 1822 Secret Treaty of Verona.