Hawks in the US foreign policy establishment appear to have succeeded in their effort to rip the Russian-US Syrian ceasefire agreement to shreds. However, according to independent political observer Albert Naryshkin, the ‘war party’ should remember the proverb ‘be careful what you wish for…’, because Moscow and Damascus aren’t backing down.

Last Saturday, just over a week after Russian Foreign Minister Sergei Lavrov and US Secretary of State John Kerry succeeded in hammering out a comprehensive Syrian ceasefire agreement, US-led coalition jets struck Deir ez-Zor, a government-controlled city in eastern Syria which has been besieged by Daesh terrorists for nearly two years. The attack left over 60 Syrian servicemen dead, and wounded over 100 more.

More than anything, Syrian and Russian officials were incensed by the fact that immediately after the airstrikes took place, Daesh began an offensive. Lavrov made sure to highlight this amazing ‘coincidence’ in his speech before the UN Security Council on Wednesday.

“And here an amazing thing happened,” Naryshkin noted, in his analysis for PolitRussia. “The US, which never apologizes for anything or to anyone, suddenly expressed regret, and apologized for the death of Syrian troops.”

©
Sputnik/ Michael Alaeddin
Syrian Politician to Sputnik: ‘WWIII Has Begun, and It’s Being Fought in Syria’

Soon afterward, US media began buzzing that the Pentagon was “furious over the fact that someone was apologizing and officially calling its actions mistaken or regrettable.” But at that moment, the journalist added, the situation evolved further, widening the rift between Washington on one side and Moscow and Damascus on the other.

“On the one hand,” Naryshkin recalled, “after the meeting between Lavrov and Kerry at the UN General Assembly, we didn’t hear anything to the effect the truce agreement was ruined, or that the US would abandon its commitments. However, other events allow us to characterize the current status of the treaty as nothing more than a ‘phantom’.”

This comes down to three facts, according to the journalist. First and foremost, it stems from the brazen attack on Deir ez-Zor, which was not only a violation of the truce, but proof that there are at least elements in the US political establishment who are “ready to revive the idea of direct military operations against Assad’s forces.”

Secondly, there is fact that some militants, including Jabhat Fateh al-Sham (formerly known as al-Nusra) never had any intention of halting the fighting. Finally, Naryshkin noted, there was the Syrian Army’s decision to withdraw from the ceasefire, which its high command justified by pointing out that militants had violated the truce over 300 times in a single week. The Russian General Staff soon declared it support for the decision, stating Monday that it made no sense for the Syrian Army to observe the ceasefire if militants were not willing to reciprocate. 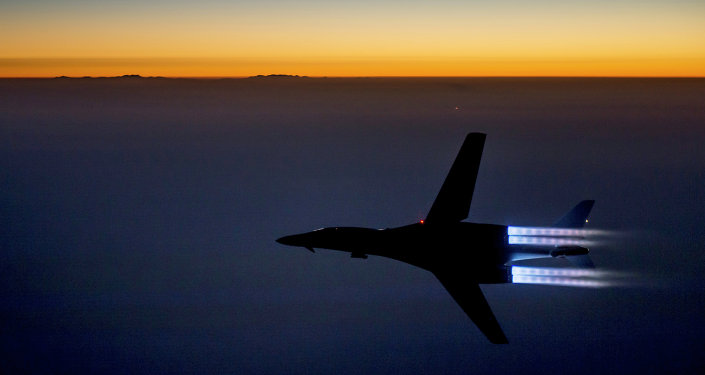 ©
AP Photo/ Senior Airman Matthew Bruch, US Air Force
The War of Nerves and Worlds: US Has ‘No Will’ to Join Russia in Syria

In other words, “the Pentagon seems to have achieved its goal, and dealt serious damage to the agreement reached at Geneva. Even if it has not been formally announced, the agreement has already been violated and is not being adhered to, and its future looks tenuous. But this was the Pentagon’s step – how will Moscow and Damascus respond?”

The answer, Naryshkin noted, is quite simple: the two countries aren’t going to give up to US military pressure.

“Damascus began its response with a show of force. The Syrian Army and allied militias launched a massive offensive in northern Hama province, where militants [from the Jund al-Aqsa, a subunit of al-Nusra] are holding on to a small enclave. Knocking them out of the suburbs of Homs, the Syrian Army would be able to ensure safety in three major urban settlements: Damascus, Homs and Hama.”

“Fighting is now taking place near the village of Koukab, with advance units moving toward Taibat al-Imam…Before that, the Syrian Army returned to the positions from which it had previously withdrawn to respond to attacks by the terrorist forces that had refused to comply with the truce.”

Moscow, for its part, “decided to raise the stakes, and to send the Admiral Kuznetsov carrier cruiser to the Mediterranean Sea. The ship will join the group of Russian ships in the eastern Mediterranean.”

“Currently, the Russian naval group in the eastern Mediterranean comprises six warships and three to four support vessels from all of Russia’s fleets. In order to strengthen the combat capabilities of the group, we plan to include a naval aircraft carrier group with the Admiral Kuznetsov cruiser in its composition,” Russian Defense Minister Sergei Shoigu explained.

Aircraft aboard the Admiral Kuznetsov will carry out strikes against the jihadists between October and January.

In effect, Naryshkin noted, the Syrian and Russian military response to the Pentagon’s provocation means failure for the hawks’ attempt to squeeze Moscow and Damascus into submission.

But at the same time, the journalist emphasized that waiting for an even ‘tougher’ response, absent another provocation from Washington, is not worth it, either. “Moscow will continue calmly supporting Syrian troops as they finish squeezing [militants in] Aleppo, and cleaning out the suburbs of Hama and Homs,” but will not escalate.

“In this way, Russia demonstrates that it will not reject peace initiatives — nor will it close the door for the implementation of the signed agreements, which can always be returned to; at the same time, Moscow shows that every provocation will be met with a serious operation inside Syria itself. And this will very quickly deplete the Pentagon’s ‘arsenal’, since it will force it to make a choice about whether to engage directly in an open military confrontation with Assad and Russia – something they vowed not to do, and wouldn’t be allowed to do.”

This is especially true given the fact that President Obama’s term is almost up, and lame duck presidents generally can’t afford to risk launching major new military operations.

Ultimately, Naryshkin suggested that even if individuals like Secretary of State Kerry could be counted on for having the good sense to stick to agreements signed with Moscow, Russia cannot sit back and hope that the president and the Pentagon will have the same wisdom. Moscow requires a ‘new strategy’ in Syria – one which it has been implementing in recent days.

According to the journalist, that strategy consists of always leaving the door open to peace negotiations, while demonstrating the will “to clear the terrorists out of Syria entirely…Washington only made concessions and agreed to talks because the opposition was beginning to run out of steam. And if the US does not want to or cannot participate in a peaceful solution, the conflict will continue to be resolved as it has over the past year, when consistently, one after another, hundreds of settlements and militia groups signed on to our proposal for a truce, while the government liberated large areas of territory, and surrounded Aleppo in a ring.”