Anywhere the aedes aegypti mosquito lives is at risk

An outbreak of yellow fever in Angola has infected thousands of people and claimed 238 lives since December. The first cases of the outbreak were reported in the capital of Luanda, and has since spread to 16 of 18 of the country’s 18 provinces.

Now, the World Health Organization (WHO) is warning that the yellow fever situation in Angola presents “a threat to the entire world.” The group said in a report obtained by the Independent:

“The evolution of the situation in Angola is concerning and needs to be closely monitored.”

Yellow fever has already been spread to China, Kenya, and the Democratic Republic of the Congo, where at least 21 people have died, by people traveling from Angola.

Countries where the Aedes mosquito lives – including the United States – are especially at risk, as well as areas where there have been previous outbreaks of Dengue, Chikungunya, or Zika virus.

The WHO says there is “an urgent need to strengthen the quality of the response in Angola” and has called for increased oversight of travelers’ immunization statuses, particularly when coming from areas affected by yellow fever. 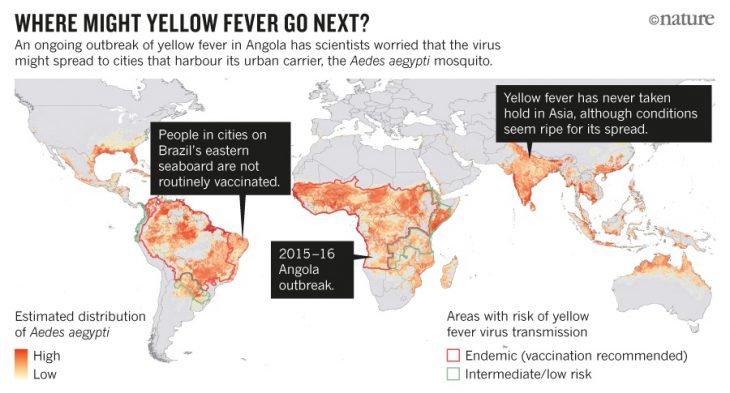 “We’re sitting on a time bomb waiting for it to blow and we’re not really doing anything about it.”

Flu-like symptoms such as muscle pain, fever, headache, nausea, vomiting, and fatigue are all symptoms of yellow fever. About 15% of patients experience a far more severe second phase of the illness and suffer from high fever, jaundice, internal bleeding, and organ failure. Nearly half of those patients die within 2 weeks.

The first yellow fever outbreak occurred in 1648. A second outbreak happened in 1793 in Philadelphia, Pennsylvania, the then-capital of the United States, wiping out 10% of the city’s population. About 17,000, including President George Washington, and several members of the federal government fled to the countryside to escape the dreaded disease. A subsequent outbreak in 1878 killed 5,000 people in Memphis, Tennessee. [1]

A highly effective vaccine against yellow fever was developed in 1936, but in order to really prevent outbreaks, many people have to be vaccinated. There are 6 manufacturers of the shot globally, but the vaccine is usually in short supply because there have been few outbreaks in recent years and hasn’t been a top priority for world health officials.