Is the real culprit oversight or Big Pharma greed?

A drug shortage is plaguing emergency rooms in the U.S., and considering 45 out of 100 people visit one every year, this could affect millions of Americans.

A new study published in the journal Academic Emergency Medicine shows drug shortages in ERs across the nation increased by more than 400% between 2001 and 2014.

Researchers analyzed data from the University of Utah Drug Information Service, which receives drug shortage reports submitted through a public site administered by the American Society of Health-System Pharmacists. Two ER doctors looked at whether the shortages had to do with drugs used in ERs, then looked at whether the drugs were used for lifesaving or acute conditions.

More than half of all reported shortages were lifesaving drugs

10% of the shortages affected drugs with no substitute, including a snake anti-venom and a post-exposure rabies medication needed to prevent deadly infections.

Drugs used to treat infectious diseases, relieve pain and treat patients who had been poisoned were the most common drugs on shortage.

“Shortages are real, they’re happening, and they’re getting worse,” he said. 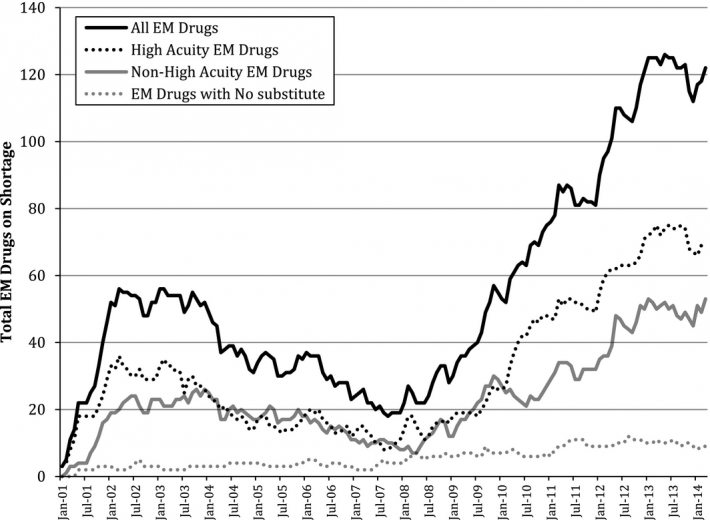 Pines, an ER physician himself, said hospitals have been hanging posters with quick alternative drug options, but nothing can fully replace the dwindling medications.

The spike in shortages between 2008 and 2014 is believed to involve U.S. Food and Drug Administration (FDA) oversight of drug manufacturers, and low Medicare reimbursement rates. Increased FDA oversight can make it more expensive to manufacture a drug, and low Medicare reimbursement rates can reduce already low profits, especially for generic drugs.

Specifically, the team said the reasons for the shortages included manufacturing delays (25.6%), supply and demand (14.9%), and availability of raw materials (4.4%). Pharmaceutical companies blamed a “business decision” for a lack of medication 2.1% of the time, but in over 46% of shortages studied, no reason was given.

The industry group Pharmaceutical Research and Manufacturers of America (PhRMA) says secondary wholesalers are to blame.

“The manufacturer of a drug has no influence or control over the prices charged by a secondary wholesaler to a hospital or pharmacy,” the group said in a statement on its website.

“Many factors” can lead to drug shortages, according to the Healthcare Distribution Management Association, a wholesaler industry group. They went on to say shortages typically occur with “insufficient warning and often [require] significant time and resources to manage.” 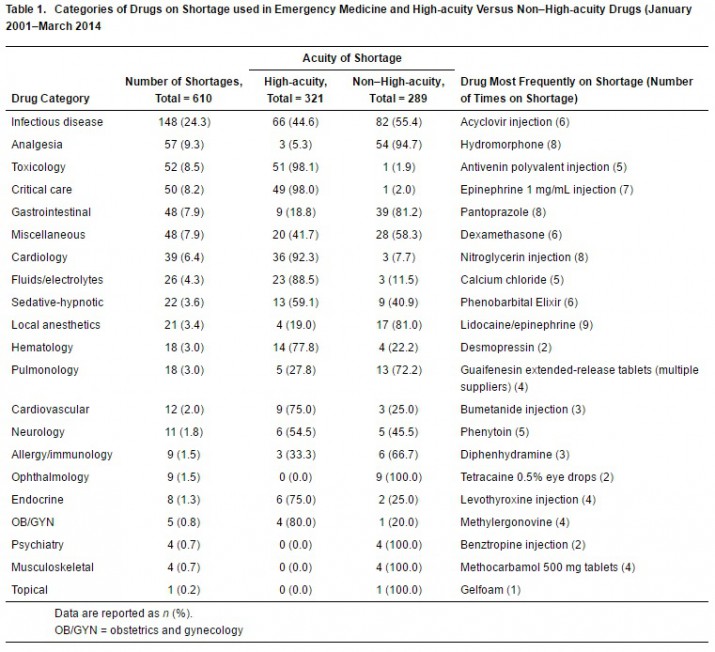 The FDA has a long-term strategic plan to prevent drug shortages, but it cannot require pharmaceutical companies to produce more drugs, make certain drugs, or change the amount distributed.

“There are a number of factors that cause or contribute to drug shortages that are outside of FDA’s control,” the agency said.

And while more drug oversight is certainly a good thing, it can pose a problem for drug companies. It is often cheaper to stop making a drug than it is to submit to enhanced inspections or invest in infrastructure.

“This is one of the byproducts of a focus on cost in health care,” explained Pines. “There may be a demand for medication, but it may not be in a company’s best interest to produce it because the amount they can charge is often lower than the amount it costs to manufacture it.”

It’s unlikely that companies will start making more of the drugs so desperately needed by emergency rooms, because most of them are sterile injectables with low profit margins.

“There are many ways to mitigate drug shortages, but there’s no magic bullet to solve them,” said Pines. “This could and potentially will get worse.”

The President has the power to order companies to produce more drugs, however. In 2012, President Obama signed an executive order demanding that the FDA take action on the drug shortage. In turn, the agency took measures to increase the supply of Methotrexate, a drug for children with leukemia, and Doxil, a drug used to treat various cancers.