Why is Canada still lying about how four Indian boys died? A Post-Mortem Study of how a Crime Carries On

Why is Canada still lying about how four Indian boys died? A Post-Mortem Study of how a Crime Carries On

“I have been placed in the awkward predicament of sustaining the claim that the boys were fully dressed in winter garments, when of course they were discovered clad only in light summer clothing lacking even overcoats and footwear. To allege they were merely trying to visit their parents over the holiday does not correspond with the facts of their deaths.”

“(The) Inquest showed (the) boys did not run away from school because of ill treatment but to spend holidays with parents.” 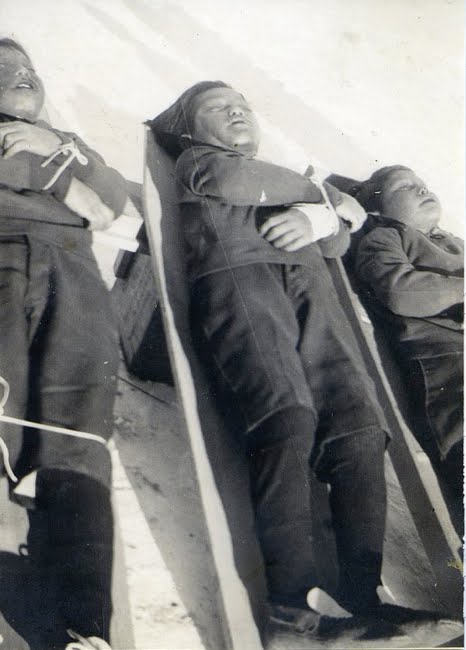 The picture of their corpses appeared on the internet suddenly and conveniently this year. It was in fact the first time an image of dead residential school children was ever shown to the Canadian public, which says a lot. But why now, and why this particular photograph?

Hold on to that question.

There are only three Indian boys in the picture, but four of them were said to have died: frozen to death on January 2, 1937 after fleeing from the Lejac Catholic school in central British Columbia. In the photo, the features of the three boys show no trauma, but are composed, their hair combed, and their arms tied neatly across their chests. Their corpses are also garbed in heavy winter clothing.

Someone dressed them up that way after they died, and posed their bodies for the camera.

The first Coroner’s report claimed that the boys were not found in winter clothes but rather in “light summer clothing, lacking even overcoats and footwear.” Clearly, something terrible enough caused these boys to flee from the Lejac Indian school in the depth of night, in a blizzard, with only the clothes on their back. A cover story of their wanting to “visit their parents” was made up after the fact.

The same Coroner also reported that one of the boys had still been alive when their bodies were found. But the final Inquiry report says that all the boys were dead when discovered. So what happened to that fourth boy?

All of these inconsistencies were quickly concealed by government and church authorities in the days following their death. A fake story was issued. And that lie is still being propagated today, in accounts of the boys’ deaths published as recently as January, 2014 in the National Post.

So, why is there this continuing Big Lie? And why is this photograph being issued, right now?

The runaway boys’ names were Allen Willie, Andrew Paul, Maurice Justin and Johnny Jack, and they were all eight or nine years old. I know their story well, because I first came across it in the spring of 1999 as a doctoral student in Vancouver. The documents I unearthed then from Indian Affairs archives showed a clear cover up of what happened to the boys. And for sixteen years, not surprisingly, nobody in the media, government or academic world has wanted to look at what I unearthed.

That said, the evidence suggesting foul play and concealment is even more damning, when we consider the identity of the Coroner who kept changing his account of the boys’ fate.

The man’s name was Dr. C.W. Pitts, the Indian school medical inspector for central B.C. He was also the son of a residential school Principal who was accused during the same period of torturing children at the Port Alberni facility. (See the 1998 statement of Willie Sport at www.hiddennolonger.com)

Dr. Pitts the younger wrote a remarkable letter to the local Indian Agent barely one year before the four boys died, in which he admitted that a genocidal “two standards of care” system operated in the residential schools, including at Lejac.

Referring to his examination of Indian kids at Lejac and stating that such regular medical care of these children would “serve no purpose”, Pitts explained that,

“Were I to apply the standards of health to them that is applied to children of the white schools, I should have to discharge 90% of them and there would be no school left” (October 22, 1935)

In short, a lower standard of care for Indian children means that lots of them could die or suffer at an “acceptable level”, and it would never be reported or dealt with. This “two standards” was an effective and legal way for massive killings of children to occur.

Two months after the death of the runaway boys, for instance, the same Dr. Pitts reported that children were routinely being admitted to Lejac who were suffering from “active tuberculosis”: a practice still reported a dozen years later at the same school, in 1948.

It’s clear now that the Lejac school was a “Special Treatment” facility in which germ warfare and experimental research was conducted routinely on Indian children by church and military doctors, just like at the Catholic Kuper Island school, the Anglican Mohawk school in Brantford, and the United Church facility in Port Alberni. And so it’s not surprising that the Lejac runaways of 1937 were driven to their deaths and that one of them was killed to keep things quiet.

As part of Canada’s big genocidal secret, the official story of these four boys’ fate is an “approved”, sanitized account of residential school deaths; and as such, it is one required and usable these days by the government’s Holocaust-Denying “Truth and Reconciliation Commission” (TRC).

The TRC, after all, has publicly acknowledged that thousands of children died in the system. Now, they have to produce the evidence behind their claim: but only the right kind of evidence, which will incriminate nobody and continue the veil of secrecy over the “Special Treatment” programs. And that’s why we are allowed to see only this one manufactured image of three dead Lejac boys, and none of the other pictures stashed away in the hidden military archives from which this picture emerged.

I still find it mind boggling how controlled a land is Canada, when not a single image of the dead is allowed to emerge for decades, and only then at the hands of the perpetrators. To say that the church and state criminals still have a firm monopoly on official truth is an understatement; and what is remarkable is how unchallenged they continue to be by otherwise “aware” Canadians.

But “one man and the truth makes a majority”, I have learned: and this latest exposure of how Canada has continued to mask a cover-up of murder 78 years old shows that the residential schools Genocide is hardly a dead issue, or a “resolved” one.

The hunt for the assassins continues.