Will Oklahoma Fracking Induce “The Big One”?

Will Oklahoma Fracking Induce “The Big One”?

For decades, California has been portrayed as the epicenter of earthquake country. Last year’s disaster movie “San Andreas,” in which a magnitude-9.0 quake lays waste to the state, was just the latest and most spectacular example.

Yet the Golden State has never been the No. 1 state for seismic activity. That title goes to Alaska, which sits atop two tectonic plates that bump into each other and produce an average of 1,000 tremors every month.

And in 2015, another state’s earthquakes began making national news. Oklahoma, many headlines read, has overtaken California as the earthquake capital of America (never mind Alaska’s claim). The U.S. Geological Survey registered 130 quakes over 3.0-magnitude (about where people can feel them) in California last year. Oklahoma logged 888, and Alaska had 1,575. Compare that with 2010, when the southern state saw just 41.

But why this is happening now and what it means for Oklahoma is widely misunderstood.

The ‘minor-league’ earthquake capital of America

The “earthquake capital” title is one that Oklahoma’s state geologist, for his part, says the state doesn’t deserve. 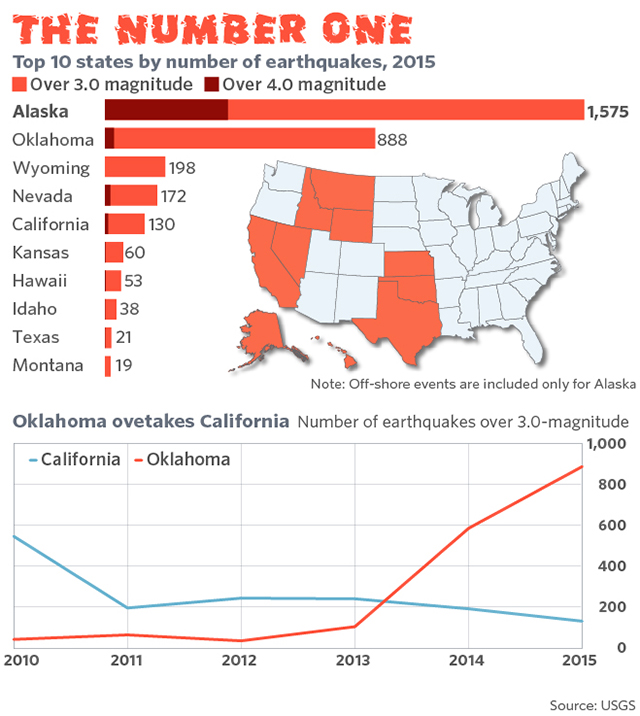 Most of the Oklahoma quakes registered in 2015 were below 4.0-magnitude. Alaska registered a 7.1-magnitude earthquake in January —roughly equal to 1 million 3.1- magnitude quakes. That one quake alone was more powerful than all of Oklahoma’s earthquakes from last year combined, Boak says.

California, too, tends to see more large (over 5.0-magnitude) quakes than Oklahoma, and seismic activity is spread throughout the state. In Oklahoma, the activity is concentrated in only about 16% of the state.

That’s no coincidence: areas where quakes are happening are the same ones that have seen a boom in oil and gas production. Oklahoma may not be the earthquake capital, but Boak says, when it comes to earthquakes that have been induced by human activity, “there’s no place that can match Oklahoma.” The state is the largest example of induced seismicity in the U.S., probably the world.

A recent post over at the data visualization site Metrocosm includes two graphics that bear out the connection. Here is a map showing the region where most of Oklahoma’s oil and gas production happens. 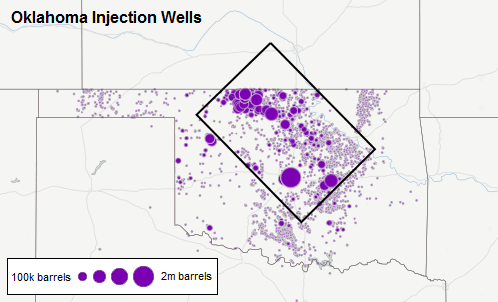 All of Oklahoma’s injection wells, each one sized proportional to its annual injection volume.
And here’s an animated graphic showing quakes over 3.0-magnitude since 2010 with that same area of Oklahoma outlined. Watch what happens in 2014 and 2015:

All U.S. earthquakes of magnitude 3 or greater since 2010. The box over Oklahoma is the same region shown in the map above.

Are Oklahoma’s earthquakes induced by fracking?

Oklahoma’s earthquake count continues to make headlines as 2016 looks to be an even shakier year, and plenty of folks are eager to blame hydraulic fracturing, or fracking.

But USGS has reported that fracking is directly causing only a small percentage of the induced earthquakes that people actually feel in the U.S. The real cause is wastewater disposal.

This is where everything gets a bit scientific, and eyes tend to glaze over. Hang in there, and we’ll reward you on the other side with a GIF of Dwayne Johnson aka The Rock battling to survive the Big One in “San Andreas.”

Fracking, in which fluid is injected under high pressure into shale rock formations, is what gets an oil well going, but fracking only lasts a few days to a week. The frack job produces some wastewater, but over time the well produces much, much more. That’s because as much as it’s an oil well, it’s a water well; for each barrel of oil produced, there are anywhere from 10 to 20 barrels of water. In a few Oklahoma wells, the ratio has been as high as 99% water, 1% oil.

That wastewater is pumped into separate underground disposal wells, which go far deeper than the fracked well. And it’s this injection of wastewater deep underground that seismologists say is inducing earthquakes.

This all might seem like picking at nits — after all, fracking is what made Oklahoma’s shale-oil boom viable. Reports have noted that the rise in quakes tracks the increase in wastes produced since a wave of fracked wells began operating in the state.

But USGS has gone to pains to correct the fracking misconception.

“We want to get the story straight of how this process works,” said Robert Williams, geophysicist for USGS.

OGS’s Boak says it’s important people realize that these earthquakes really aren’t about fracking, no matter how attention-grabbing that word can be. The Bakken Shale in North Dakota, for instance, produces much less wastewater, and hasn't induced earthquakes. The solution, he says, must be focused on “slowly restricting the amount [of water] you can inject and where you’re allowed to inject it.”

Legislators are starting to get serious about doing this. This year, Oklahoma’s Corporation Commission requested oil and gas producers to cut wastewater disposal amounts by 40% in large swaths of the state. In the past, efforts to cut back have been mostly one well at a time. Meanwhile, the collapse in oil prices has meant a brutal reckoning for the state’s oil and gas producers.

And now, here’s The Rock.

Will Oklahoma see an induced ‘Big One’?

So far in 2016, Oklahoma has seen six quakes of magnitude-4.0 or higher, including a 5.1. The largest earthquake ever recorded in Oklahoma was in November 2011, a magnitude-5.7 that flattened 16 homes, injured two people and was felt in parts of Illinois, Kansas, Arkansas, Tennessee and Texas. It is believed to be the largest quake induced by fluid injection in the U.S., and is likely one of the largest induced quakes ever.

“The more small quakes you have, the higher the chances for a larger quake to occur,” said Williams.

Boak says that should oil and gas production in Oklahoma continue at the same pace as in 2015, there would be a 6% chance of a magnitude-6.0 quake in the next four years.

If such a quake occurred close to a city or town, it would cause a lot of destruction. Just how much is unclear, but it would be felt farther and likely cause far more damage than similar events in California, where earthquake safety is a statewide priority. In nearby Missouri, a series of historic earthquakes over 7.0-magnitude in 1811-1812 rang church bells on the East Coast.

Part of the reason for all the unknowns, including the odds of a Big One in Oklahoma, is lack of good data. In the past, Oklahoma hasn’t been the focus of earthquake research or fault mapping, versus California, where infamous faults like the San Andreas have been studied for decades. Research is ramping up to understand more about Oklahoma’s geology and seismic history, but that will take time.

Meanwhile USGS is urging the people of Oklahoma to seek out information on earthquake preparedness. It might be the kind of warning they’re accustomed to: the state is known as a tornado bull's-eye and is usually among the hardest hit by flooding.