On Wednesday, Israeli President Reuven Rivlin paid a visit to Kiev. Expecting to talk about the closeness of Ukrainian-Israeli ties, President Poroshenko was met with criticism instead. Rivlin told lawmakers that the crimes of Ukrainian nationalists during WWII should never be forgotten. Poroshenko responded as best he could -by blaming Russia.

It’s difficult to imagine President Rivlin’s long-expected visit to Kiev going any worse for Ukrainian authorities. Arriving late to the official ceremony to meet with President Petro Poroshenko, forcing him to stand around waiting aimlessly, Rivlin then moved on to make a cardinal mistake: to criticize the history of radical Ukrainian nationalism.

Speaking at a special session of Ukraine’s parliament, the Rada, the Israeli president pointed out that wartime nationalists from the Ukrainian Insurgent Army and other militias collaborated with the Nazis in crimes against Ukrainian Jews.

“About 1.5 million Jews were killed on the territory of contemporary Ukraine during the Second World War,” Rivlin said. They died “at Babi Yar, and many other places…Many Ukrainians were accomplices in this crime. Among those who stood out were fighters from the OUN [OUN-UPA, the Ukrainian acronym for the force], who tortured Jews, killed them, and in many cases, handed them over to the Germans.” 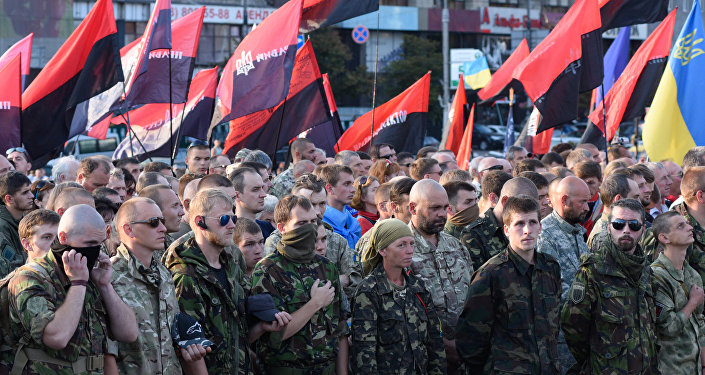 ©
Sputnik/ Stringer
Over 5,000 Militants Estimated to Be in Ukraine’s Right Sector – Investigative Committee

“Relations between the Ukrainian and Jewish people today are looking forward toward the future, but we must not allow history, both the terrible and the good, to be forgotten,” the president emphasized.

Rivlin’s visit coincided with the 75th Anniversary of the Babi Yar tragedy. Babi Yar is a ravine in Kiev. Beginning in September 1941, it became a site for massacres by Nazi German forces and local collaborators, where over a hundred thousand people – mostly Jews, Gypsies, anti-fascist Ukrainians and Soviet prisoners of war were exterminated. Many historians consider Babi Yar to be the largest single massacre of the Holocaust.

Finishing his speech, Rivlin was forced to halt his visit and fly back to Israel after receiving word of the passing of former President Shimon Peres.

The Israeli president’s remarks met a cool reaction in the Ukrainian leadership, both from the president, whose phone appeared to blow up after Rivlin made his comments, and from Rada Speaker Andriy Parubiy, former co-founder of the neo-Nazi Social-National Party of Ukraine, who appeared visibly perturbed.

Oleh Lyashko, lawmaker and leader of the Radical Party, quickly demanded that the Israeli president apologize for his accusations against Ukrainians and the OUN-UPA, which Ukraine’s current authorities have declared to be a heroic organization fighting for the country’s independence. Its leaders, Stepan Bandera and Roman Shukhevych, have been given the title ‘Heroes of Ukraine’.

“Unfortunately, in the prescience of parliament, the [Ukrainian] president, lawmakers and ministers remained shamefully silent,” Lyashko noted. “Rivlin’s speech is demeaning to Ukrainians; therefore, I call on the Israeli president to apologize to our state and our people,” he added.

Andrey Lozovoy, another Radical Party MP, resigned from the Rada group promoting inter-parliamentary relations with Israel “to protest the humiliation of Ukrainians.”

The lawmakers weren’t alone. Rada Vice Speaker Irin Gerashchenko suggested that President Rivlin had allowed himself a “certain incorrect and undiplomatic assessment” of tragic pages of Ukrainian history “in the parliament of a country that is currently fighting hard for its independence.”

Ukrainian political commentators were even more unabashed in their criticisms, one suggesting that the Israeli president, standing before parliament, was simply “repeating a Soviet myth,” and another that Rivlin had had “watched too much Russian television” (Russia considers OUN and UPA to be radical organizations, and their activities have been banned in the country). 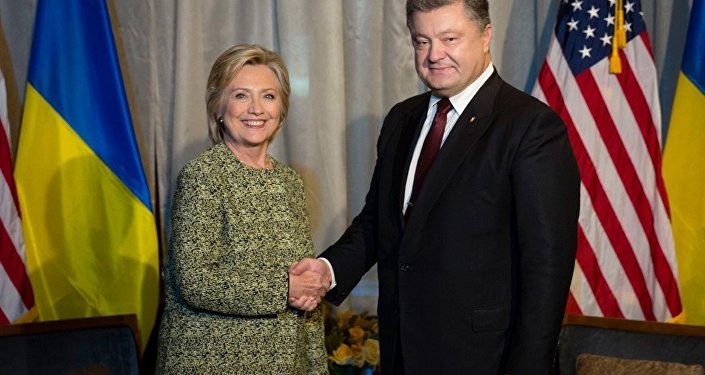 President Poroshenko, who kept silent for a day after Rivlin’s visit, finally broke down on Thursday and issued his own commentary. Speaking at an official event dedicated to the Babi Yar massacre, the Ukrainian president claimed that Russia was an anti-Semitic country which threatens Israel’s existence.

Saying that Soviet leader Joseph Stalin’s “work lives on” in contemporary Russia, Poroshenko suggested that “his disciples have retained anti-Semitism as part of their public policy, but in place of the policy of physical destruction, have come to rely on the destruction of Jewish identity. And for decades Moscow has supplied, and continues to supply weapons to those who want to throw Israel into the sea.”

Unwilling to recognize and apologize for the crimes of wartime nationalists that have become deified in contemporary Ukraine, Poroshenko attempted a bait and switch move to ‘blame Russia’, something he has become an expert at in the last two years. The question is whether anyone will believe him.