Get short URL
THAAD gets unloaded in Israel. ©  Twitter / US_EUCOM
The US military has delivered THAAD missile defense systems to Israel for the very first time. The deployment comes as a part of a joint exercise and is aimed to show the US’ “continued commitment” to Israel’s “regional security.”

The advanced systems were deployed to Israel in early March, US and Israeli military officials revealed on Monday. The THAADs – Terminal High Altitude Area Defense systems – will be stationed in the country’s south, alongside some 200 US military personnel.

ALSO ON RT.COM‘Last nail in the coffin for US peacemaking’: US merges Israeli embassy with Palestinian mission“During the deployment, our service members will work in various locations throughout Israel and will practice operational procedures for augmenting Israel’s existing air and missile defense architecture,” the US European Command said in a statement, adding that the exercise serves as a “demonstration of the United States’ continued commitment to Israel’s regional security.”

Footage from the scene shows THAAD launchers and other vehicles unloaded from military transport planes at the Nevatim Air Base, as well as US military personnel disembarking. THAAD is a system, built specifically to intercept short-, medium-, and intermediate-range ballistic missiles during their terminal phase – re-entry or descent – with a direct hit approach. 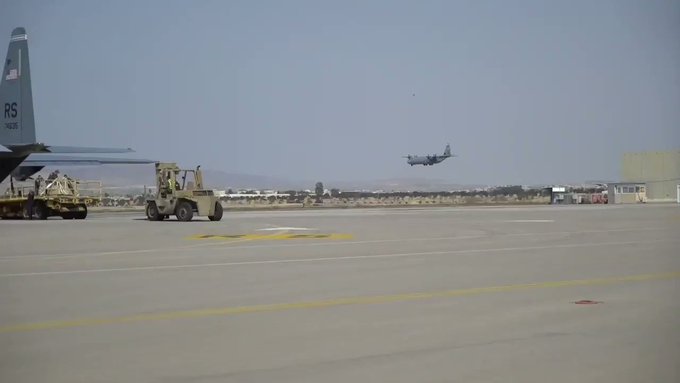 The @US_EUCOM is currently conducting a missile defense system (THAAD) exercise deployment in Israel, which is part of US efforts to implement its operational concept & mission to assist in Israel’s aerial defense.

The deployment was lauded by Israeli Prime Minister Benjamin Netanyahu, who said that the systems will bolster Tel Aviv’s capability to fend off threats from all over the Middle East region.

“The American THAAD system is considered among the most advanced systems in the world, and together with our defense systems, we are stronger in dealing with threats, close or distant, emanating from all areas of the Middle East,” he said.

While the Israeli Defense Forces (IDF) insisted that the deployment is solely defensive and “is not related to any specific current event,” it comes as tensions in the region remains high. Tel Aviv and its arch-enemy – Tehran – have been routinely trading jabs in a war of words, up to threats of total annihilation of each other. Last month, Iran unveiled several new ballistic and cruise missiles, and held major naval drills in the Persian Gulf.