A September test – meant to bring Boeing’s new 777X airframe to its limits – left the plane’s skin torn open beneath a wing and a passenger door blown off its hinges just before the trial reached the supposed stress target, according to the Seattle Times. The outlet published a photo of what it said was the aftermath, claiming the obtained picture proves the extent of the failure is greater than originally thought.

A passenger door that blew out was a secondary impact of the initial rupture, located far below the door.

But the structure failed so close to the target, Boeing won’t need to retest https://www.seattletimes.com/business/boeing-aerospace/boeing-777xs-fuselage-split-dramatically-during-september-stress-test/ …

When Boeing’s new 777X suffered a ground test failure in early September, the damage was much more alarming than previously reported. It wasn’t a cargo door blowout. It was worse.

157 people are talking about this

Back in September, Boeing indeed admitted “an issue” that led to a test with 777X being halted. It gave no details of the damage, saying merely that the test involved “bending the wings of the airplane up to a level far beyond anything expected in commercial service.” The company also said that no major changes to the design of the aircraft would be likely. 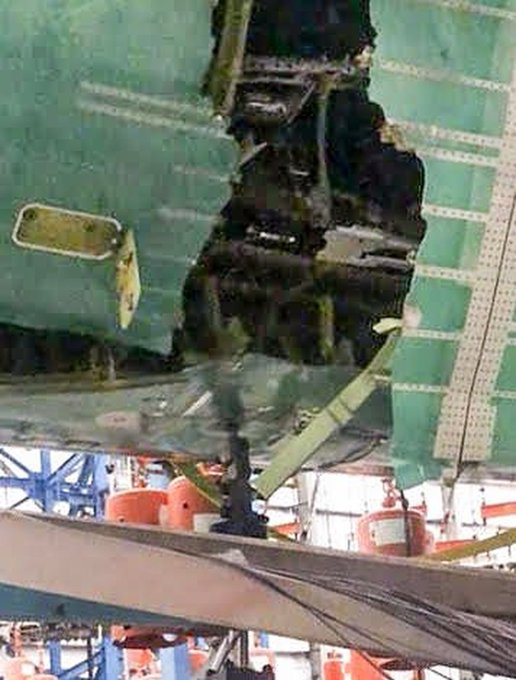 Early media reports also claimed that it was a cargo door that blew out, but the Seattle Times now says it was actually a passenger one, adding that the ruptured fuselage made a noise so powerful that workers in the next bay reported hearing a “loud boom” and felt the ground shake.

Boeing Communications Director Charles Bickers confirmed in an email statement to the Sputnik news agency that the ST report was “correct – no concerns here.”

Because the problem occurred at 99 percent of what regulators refer to as “ultimate load” – 1.5 times the maximum forces the plane will have to withstand during normal flight – the Federal Aviation Administration may allow the company to merely reinforce the body where the rupture happened, the newspaper wrote. Meanwhile, Boeing was already forced to replace its factory’s vaunted specialized assembly robots, designed to put together two sections of the 777X’s fuselage, with human workers earlier this month when the bots proved incapable of doing the job properly.

ALSO ON RT.COMRise of the machines postponed: Boeing relies on humans again after robots fail its 777X jet fuselage assemblyBoeing is already in the hot seat, facing declining market share and plummeting stock prices after two 737 MAX planes crashed within six months of each other, killing more than 300 people in total, due to a known issue with the plane’s flight-control computer system.

The company was aware of the problem and had crafted fixes for it – but only installed them as “extras” on the aircraft. Hundreds of 737 MAX planes were grounded worldwide earlier this year as government agencies and congressional committees launched a probe into how Boeing was allowed to largely conduct its safety certifications itself.

Even before the real results of September’s 777X stress test emerged, Boeing was being accused of “a pattern of deliberate concealment” by the US Senate; this latest development is unlikely to help its case. Boeing stock plunged over 5 points as markets opened on Wednesday.