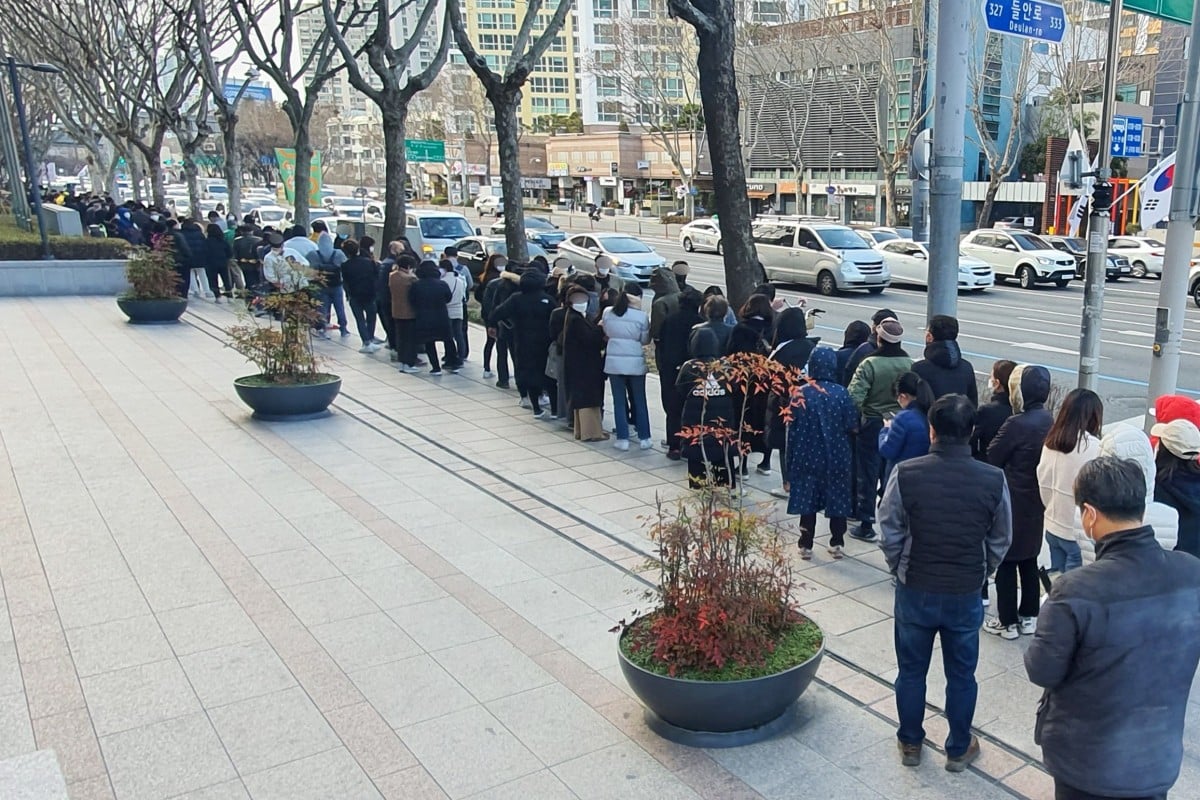 cases on Friday, taking its total – the highest in the world outside China – to 2,337, the Korea Centres for Disease Control and Prevention (KCDC) said.

The death toll from the virus stood at 13, unchanged from the day earlier.

Most of the new infections were in the southeastern city of Daegu, the location of a church at the centre of
South Korea’s

outbreak, the KCDC said in a statement.

The outbreak has prompted K-pop boy band BTS to cancel its scheduled April concerts in Seoul, according to its music label, Big Hit Entertainment.

“We regret to announce” that the Seoul concerts have been cancelled, Big Hit Entertainment said in a statement.

South Korea’s total is expected to increase further after checks began on more than 210,000 members of the
Shincheonji Church of Jesus

, a group that mainstream churches see as a cult that is linked to around half of the country’s cases.

A 61-year-old female member developed a fever on February 10, but attended at least four church services in Daegu before being diagnosed.

Daegu mayor Kwon Young-jin said the city’s total could reach as many as 3,000 in the coming days as more test results on Shincheonji members come through, Yonhap reported.

“The next one week will be the tipping point,” he said.

South Korea said a supplementary budget due next week to cushion the economic hit of the coronavirus will be larger than the 11.6 trillion won (US$9.5 billion) package spent during the 2015 Middle East respiratory syndrome (Mers) outbreak.

government announced on Friday as the virus disrupts exports and weakens consumer spending.

Once approved by the parliament, the government plans to spend more than 75% of the budget within the first two months.

Hyundai Motor suspended production at one of its factories in South Korea’s southeastern city of Ulsan after a worker tested positive for Covid-19, the company said on Friday.

“The company has also placed colleagues who came in close contact with the infected employee in self-quarantine and taken steps to have them tested for possible infection,” Hyundai Motor said.

Meanwhile, Korean Air Lines said it will measure temperatures of all passengers for flights to the US and refuse passengers whose temperature exceeds 37.5 degrees Celsius (99.5 degrees Fahrenheit).

The move comes after a Korean Air flight attendant who worked on flights between Seoul and Los Angeles tested positive for the coronavirus on Tuesday, prompting the firm to shut its office near Incheon International Airport where the crew briefing room was located.

The country’s top airline said in a statement that it also plans to expand these procedures to other routes.

In Seoul, the capital, people waited in long queues at some stores to buy masks, which have been in short supply, despite only a few dozen infections reported in the city.

The past week’s sudden surge in cases has ignited criticism of the government’s handling of the crisis, particularly a decision to limit arrivals from China, rather than imposing a blanket ban.

Moon’s approval rating has dropped to its lowest since November, a poll showed on Friday, amid growing criticism of his government’s handling of the outbreak.

Realmeter, which surveyed some 1,500 people on Tuesday and Wednesday, said Moon’s popularity fell to 44.7%, down from about 50% before the country confirmed its first case of virus infection on January 20.

Some of the biggest drops in the president’s ratings came from Daegu and North Gyeongsang province, the country’s worst-hit regions.

The deteriorating sentiment has prompted more than 1.2 million people to sign a petition demanding Moon’s impeachment.

His office, which had promised to respond to any petition gathering 100,000 or more signatures, said it was working on an answer.

The
US military reported its first virus case

on Wednesday, in a 23-year-old soldier based in Camp Carroll, about 20km (12 miles) from Daegu.

About 28,500 US troops are stationed in South Korea, which remains technically at war with North Korea.

The South Korean military has also reported at least 25 infections, and has confined most troops to their bases.

A “command post training” exercise usually held by the two militaries’ Combined Forces Command is to be postponed “until further notice”, the combined command said in a statement.

The US commander in South Korea agreed to the delay after a request by the chairman of its joint chiefs of staff.

The South Korean embassy in Vietnam said that it received a notice about the suspension from the Vietnamese government.

The US may in future have to curb travel to Italy, South Korea and other countries over the virus, President
Donald Trump

said on Wednesday, but now was not the right time.

South Korea has the most virus cases outside China and Italy and Iran are emerging as new epicentres of the rapidly spreading illness.