Update (1430ET): Thankfully for everybody who bought the dip on Friday, despite a barrage of aggressive and even “dishonest” questions from reporters, President Trump managed to convey during Saturday afternoon’s coronavirus press conference that the administration really is on top of things, and that initial reports about missteps and the “muzzling” of CDC officials were incorrect.

Unsurprisingly, the first question, of course, was about Trump’s comment about the virus being a “hoax”, a statement Trump made at a rally in South Carolina that was misquoted and misrepresented by the press. Asked if he thought the outbreak was “hoax”, Trump clarified that he was talking about the Democrats criticism of his administration’s response to the outbreak, not the outbreak itself.

President Trump confirms he was talking about the Democrats

“The hoax is on them” 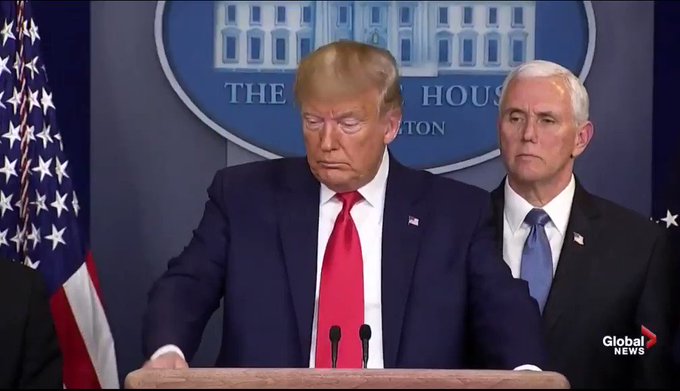 Nevertheless, reporters continued to harp on Trump’s “hoax” comment while hammering him on a range of issues from allegations that DHS workers were exposed to the virus while transporting evacuees, to reports that the administration was “muzzling” the CDC to try and prevent the ‘real scientists’ from breaking with the administration’s optimistic takes on the risk to the public health and economy.

But as it turns out, the ‘real scientists’ actually agree with Trump: While the US needs to take deliberate steps to contain the outbreak, things so far actually haven’t been all that bad!

During one particularly memorable moment, a reporter asked Trump about a WaPo report claiming that Vice President Pence “muzzled” CDC officials like Dr. Fauci, while intimating that the administration was emulating Beijing by trying to prevent ‘bad news’ from getting out.

Fortunately, Dr. Fauci was there to rebut the claim: Which he did, with vigor.

“I have never been muzzled – ever – and I’ve been doing this since the administration of Ronald Reagan. We were set up to go on some shows and when the VP took over…we had to stand down on a couple of shows and resubmitted for clearance, which we immediately got.”

Moving on, at one point, Trump insisted that the US was “super prepared” to deal with the outbreak, while advising that “most Americans” who catch the virus will probably only experience mild flu-like symptoms (not the most reassuring thing he could have said, but hey…).

The doctor, and legendary virus expert, then went on to reiterate that President Trump and the administration did act swiftly to try and contain the spread of the virus, and deserved some credit for doing so.

Anyway, during the opening minutes of the press conference, President Trump confirmed that the US has confirmed 22 cases of COVID-19 outside of the dozens of evacuees from either Wuhan or the ‘Diamond Princess’.

Of the non-evacuee cases, four are very ill, 14 have recovered, and, as we learned just before the press conference started, one woman succumbed to the virus in Washington State. Trump then went on to claim that his administration has taken “the most aggressive action in modern history” to confront an outbreak.

“Since the early stages of the foreign outbreak my administration has taken the most aggressive action in modern history to confront the spread of this disease,” Trump said.

He added that he’s remained in contact with President Xi, and that China has made “tremendous progress.”

“And I wanna say that China seems to be making tremendous progress. And if you read Tim Cook of Apple, you’ll see that they’re back to full operation in China,” Trump said.

As far as we can tell, this isn’t exactly true, the company’s suppliers including Foxconn are still struggling to ramp up production. But most of the Apple stores in China have reopened.

Next up was VP Pence, who announced new restrictions on travel from Iran – an expansion of existing travel restrictions – while increase travel advisories for hot zones in Italy and South Korea to ‘Level 4’. Pence added that he’s spoken to Washington State Gov. Jay Inslee, and that “every American would be proud of what I heard.” Pence credited the governor and his state for being on top of the outbreak in Washington, and declared that Pence’s team has been working “seamlessly” with state and local officials on the ground.

But most importantly, Pence said that the risk to the American public – even those who live nearby where infections have been reported – remains “low.”

“The average American does not need to go out and buy a mask,” Pence said.

But if they feel like buying one anyway, Pence said the US has 40 million masks available today, and that the government had contracted with 3M to produce 35 million more masks a month. Pence added that if the situation worsens, the administration would increase the availability of these masks.

“Let me assure every American…that this is an ‘all hands on deck’ effort,” Pence said.

Secretary Azar started his statement by offering condolences to the family of the woman who passed away from the virus in Washington State. He also said that the CDC and federal officials will fight the virus by assiduously “identifying and isolating” patients, while tracing their steps and warning everybody who came into contact with the infected persons that they need to be on high alert and report any suspicious symptoms. “This is an evolving situation and we will keep you appraised,” one said.

Supporters and critics alike conceded that the press conference was far more reassuring than what Trump said on Wednesday. And by playing up Dr. Fauci’s role in the response, the administration has skillfully undercut its critics.

Trump not a great press conference but better than last week

Fauci is on the ball

But the real question is: Will the market feel the same?

Three days after President Trump held his first White House press briefing on the coronavirus threat – where he appointed Vice President Mike Pence to be the administration’s “not-Coronavirus Czar”, before quickly clarifying that it wasn’t a demotion for HHS Secretary Alex Azar (rumored to be near the top of the president’s shit list) – Trump will hold another presser at 1:30 ET to discuss the coronavirus threat.

The presser is being held to discuss “the latest CoronaVirus developments”…

I will be having a 1:30 P.M. Press Conference at the White House to discuss the latest CoronaVirus developments. Thank you!

Earlier this morning, the FDA announced a new plan to speed up testing and loosen restrictions on local labs, a decision that will likely lead to a surge in newly confirmed coronavirus cases as the true scope of the outbreak in the US becomes apparent.

In other words: Trump has some explaining to do.