The U.S. Surgeon General has urged people to “stop buying masks,” saying on Twitter that they’re not effective in preventing the general public from catching coronavirus.

They are NOT effective in preventing general public from catching #Coronavirus, but if healthcare providers can’t get them to care for sick patients, it puts them and our communities at risk!
http://bit.ly/37Ay6Cm

Coronavirus disease 2019 (COVID-19) is a virus (more specifically, a coronavirus) identified as the cause of an outbreak of respiratory illness first detected in Wuhan, China.

“The best way to protect yourself and your community is with everyday preventive actions, like staying home when you are sick and washing hands with soap and water, to help slow the spread of respiratory illness,” Jerome M. Adams said in a tweet.

His warning is extremely timely, as we detailed earlier, in mid-January, we noticed rising domestic and international internet searches for “virus mask” and “n-95 mask” amid the spread of Covid-19 in China.

Weeks later, we noted how confirmed cases and deaths in China exponentially soared, resulting in a “global run” on virus masks, specifically 3M N95 masks. From Asia to Europe to the US, mask demand jumped despite mainstream media and the Trump administration keeping quiet about the outbreak in Asia.

By mid-February, the virus had spread to Japan, South Korea, Iran, and Italy, and other parts of Europe, prompting many to believe the early chapters of a pandemic were starting. This forced the Centers for Disease Control and Prevention (CDC) last week to announce the expected community spread of the virus in the US.

The CDC’s latest warning said the virus could cause “significant disruption” to American life, which triggered panic in Hawaii, as residents across several islands rushed to Sam’s Club and Costco to buy food, health supplies, and masks if they could even find any.

Across Amazon, 3M N95 masks have been a hot commodity. Many sellers had “currently unavailable” – as it suggested masks are sold out. The remaining sellers on the e-commerce platform marked up prices nearly 10x in some cases.

Amazon sellers were also running low on hand sanitizer products, such as Purell, a multi-surface disinfectant spray, that saw a doubling in price over the last week.

“This feels different than the other market crisis in that it involves disruptions to daily life,” a chief economist at Moody’s Analytics said. “This isn’t financial. This is not some obtuse thing on a screen.”https://nyti.ms/2Px2OVO

“This feels different than the other market crisis in that it involves disruptions to daily life,” said Mark Zandi, chief economist at Moody’s Analytics. “This isn’t financial. This is not some obtuse thing on a screen. Schools may close. I may not be able to get pasta or oatmeal.”

By Friday, hand sanitizers, face masks and cleaning supplies at CVS, Walgreens, and other pharmacies across the US warned of supply shortages after a jump in demand, likely because the CDC’s warning spooked Americans.

“This demand may cause temporary shortages at some store locations and we re-supply those stores as quickly as possible,” a spokesperson for CVS said.

On the hunt for hand sanitizer? You’re not alone. Brian snagged the last two travel size bottles at the Walgreens on Denny. The CVS and Bartell’s we’ve been to are wiped out. That small bottle retails for about $2 – on Amazon, a 2-pack is going for $20 #KOMONews 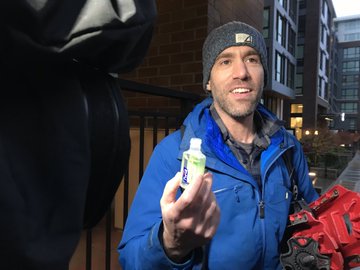 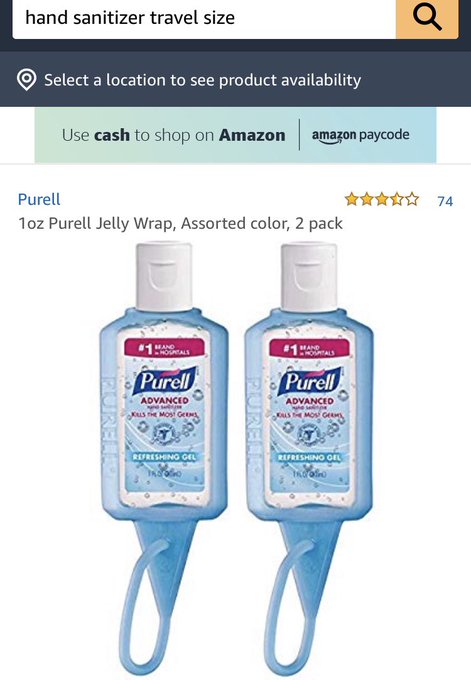 There was undoubtedly a knowledge curve of virus preparation in the US. As to who was buying up all the masks in January remains unseen, but some reports suggested arbitrage, as people bought in bulk and sent masks to Asia for a sizeable markup.

As confirmed US cases reached 63 on Friday, Bath & Body Works, owned by L Brands, said its hand sanitizer business has been “growing at a very high rate.”

Clorox CFO Kevin Jacobsen said earlier this month in a call with analysts that, “We are taking up inventory levels [to] be prepared for the potential increase in demand for some of our bleach products.”

Reckitt Benckiser, the manufacturer of Dettol and Lysol, said it had invested into its supply chain to increase the capacity of virus-fighting products to meet demand.

“We’re continuing to make capacity investments to ensure that we don’t run out at the peak for some of these products that we have that, frankly, consumers demand, and we can’t fulfill,” said CEO Laxman Narasimhan

Twitter users are documenting the run on virus masks to health products to now food. The great panic of 2020 is underway:

SOLD OUT! Face masks are sold out at many pharmacies across the Washington, DC area amid coronavirus concerns & fears. 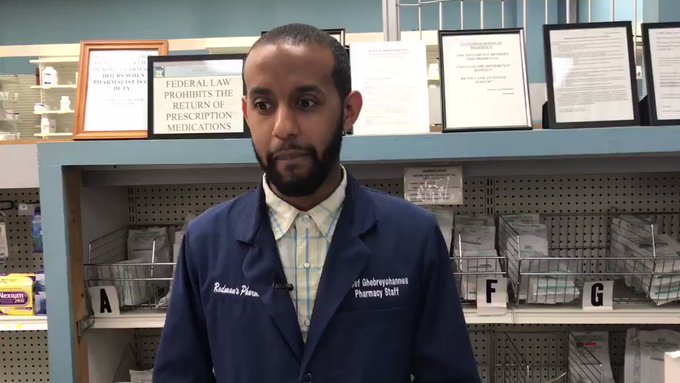 I just went to amazon and they are sold out of every surgical mask that they got. They even out of the 100 pacs. 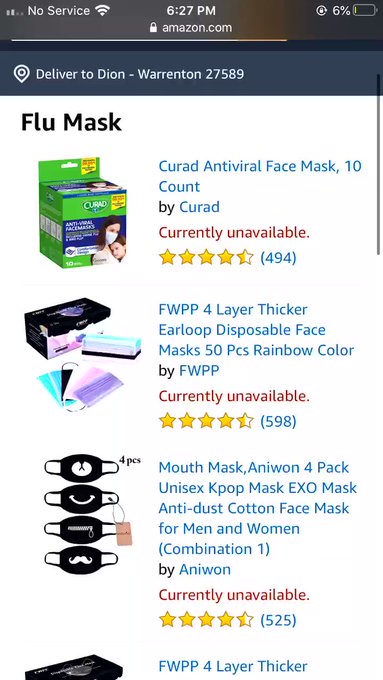 These weren’t even the n95 respiratory masks recommended by the CDC (those are sold out almost everywhere) 1 single disposable mask on Amazon is $49)… but anyway, yeah, there’s a shortage!

Bay Area is having a normal one, folks. This CVS is _completely_ sold out of both regular and travel size hand sanitizer. 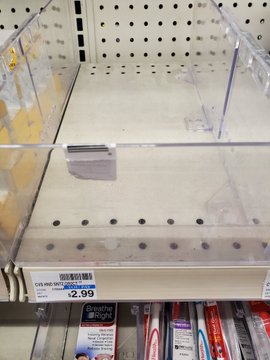 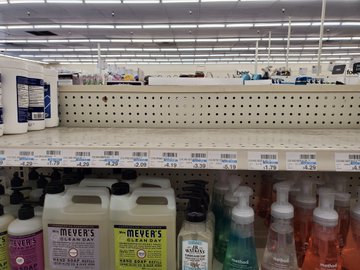 My mom sent me $100 to go get a corona virus “kit” & was like “lol I’m kidding but I’m not immediately go to CVS and get everything on this list..” then she sends me this photo of my dads dooms day prep:

People are stocking up. Corona virus

paranoia is in full effect 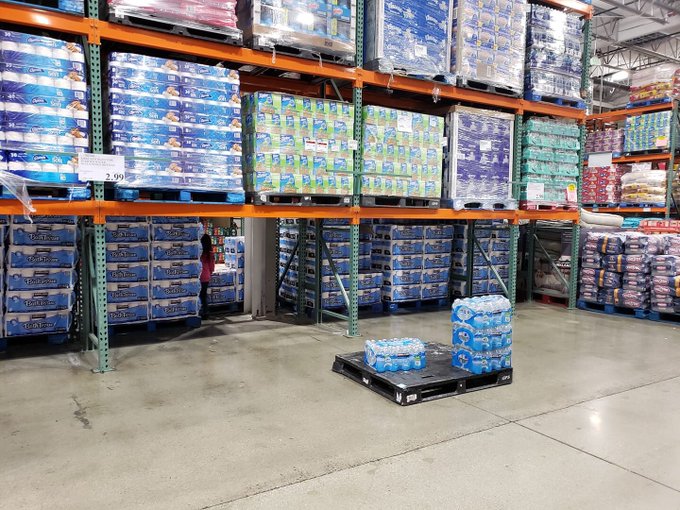 The virus has my city terrified, so every shipment of masks we get is sold out immediately. We had to start telling people they couldn’t buy in bulk bc they were reselling for dumb profit 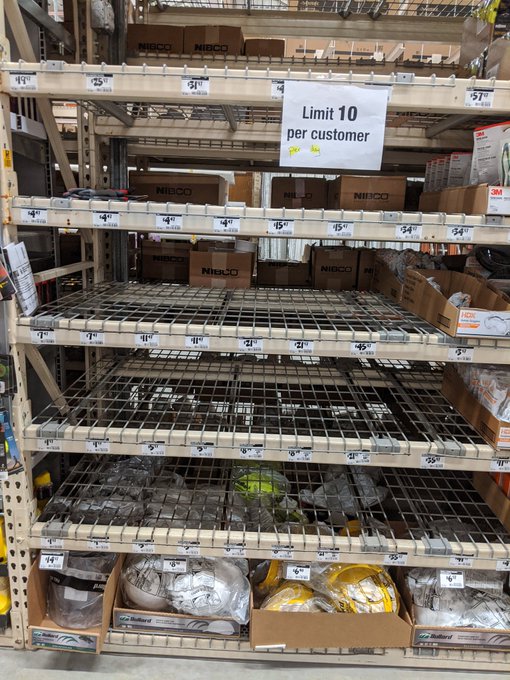 All the masks sold out & this is in the US where the virus hasn’t even hit yet.. 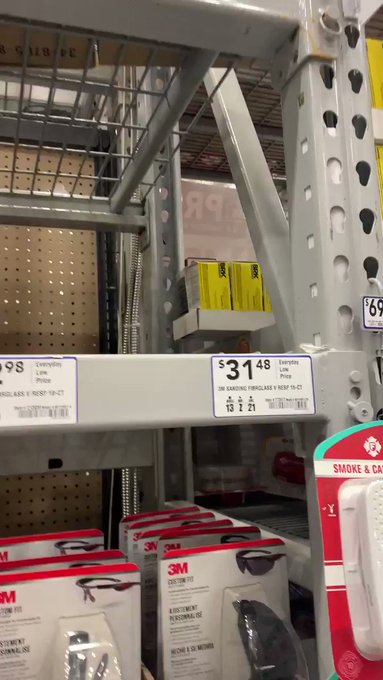 UPDATE: Surgical masks are SOLD OUT at Crosby’s Drugs in Columbus amidst coronavirus concerns. @JessePagan_ told you last month the store was selling thousands weekly. Now, the owner says she gets at least 50 calls a day asking if she’s received the next shipment. Cont. 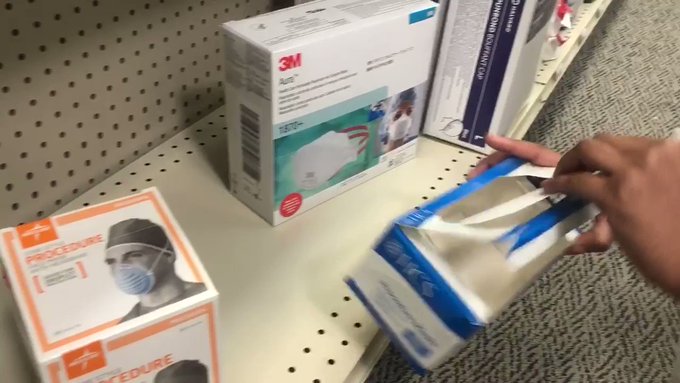 We finally found some N95 masks in Tulsa at a tool store. The concerns about coronavirus have led to most stores being sold out of them. @AmberHughesTV reached out to the school districts today to find out how they’re preparing. Read more here….https://www.fox23.com/news/local/what-is-your-district-doing-protect-students-coronavirus/DSURFTPEVFBYNGCZVMUEBOA64U … 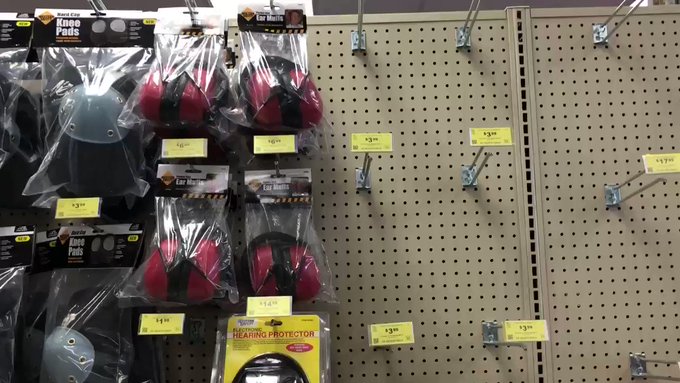