REMEMBER: If the banks DO end up being crashed and they come for your silver and gold, SHOOT. The days are OVER where when they win we lose, and when we win they steal. DO NOT BUDGE even if they threaten you with 100 years in jail, DO NOT let them take your silver or gold even if they make it a felony to have it. These are the bastards that stole the election. MAKE THEM CRASH TO HELL.

UPDATE TO BELOW: People are organizing to hit silver hard Monday to get even with those who stole the election. I kid you not. They are going to bust the $30 silver barrier by all buying in at $35. Once that happens, the price may go to infinity and beyond. The goal will be to put the banks under. Yes, that will lead to economic disaster but it absolutely will fry the living hell out of the fraudsters who stole the election. Americans are PISSED and are basically saying that if they are going to steal the country, it might as well be wrecked. It will make no difference to us anyway, other than it will all start sooner than THEY wanted.

For this to work, you must take posession of your silver, (all you can) and then buy silver futures HIGH, to drive the price up as much as possible AND COLLECT AS SOON AS POSSIBLE. WHEN YOU GET THE PAPER, DEMAND DELIVERY. It has been discovered that banks floated themselves by manipulating the markets to keep silver down. If people force the price of silver to go up significantly over $30, the banks then have to cover their shorts. The more it goes up, the harder the banks get hit and if it can be pushed to $100 ADIOS. They’ll be destroyed. And that will be partial payback for kikedom stealing the election.

There WILL be repercussions as a result, but what does mainstreet America have to lose? Main street Americans are already facing losing EVERYTHING. Might as well make the other side that has already formulated doom for the rest of us pay.

Obviously with Biden in they’ll just print money and hand it to the banks by the trillions. Therefore, whatever is done has to result in such a massive shift that doing so won’t work. 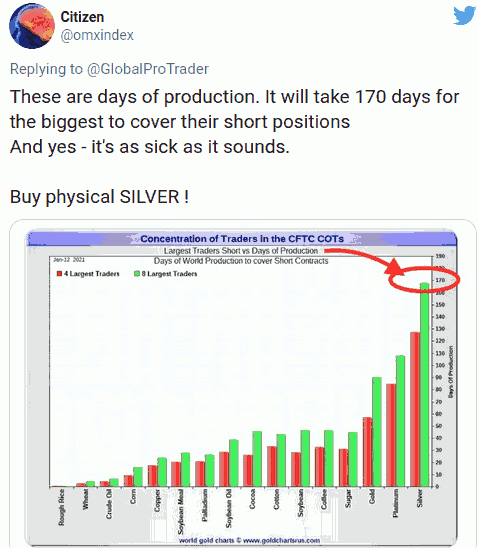 Silver is likely to be pumped now. Get into it if you can. There’s a rumor post going around showing it up DRASTICALLY on Monday. It is still at $27 the last I checked.

One comment about below: The Jews are screaming DO NOT BE VIOLENT through every outlet they have, and when Americans find a NON violent way to put things right, they then scream CONSERVATIVE. RIGHT WINGER. WHITE SUPREMACIST. TERRORIST! WE ARE GOING TO TAKE YOUR SILVER AND EVERYTHING ELSE IF WE GO DOWN!!!!!

They are such despicable A-holes.

One more thing: There are those who are skeptical and think this is the deep state playing games because too much money is going into it, and it is being sustained too long to be credible. But what if Elon Musk is behind this, getting even after the FAA shut down SpaceX? There are white hat billionaires too.

Since the MSM and “trigger girl” are flipping out screaming “white supremacist, it is probably a GREAT idea to short silver.

Kick those who stole the election RIGHT IN THE NUTS.

MY COMMENT: GEE, THAT SOUNDS LIKE A GREAT WAY TO STICK THEM FOR ALL THAT CORONAVIRUS BAILOUT MONEY THEY GOT WHILE JOE AMERICA GOT STUCK WITH PEANUTS. SHORT SHORT SHORT!!! Make them pay!

Here you go for stealing the election. How about a whole bunch of destroyed banks? Sure, we will all lose our dollars but YOU will be screwed out of the ability to rape us ad nauseum. The election was the litmus test – America needs a reset, on OUR TERMS. What is bad for the Jews is GOOD for us, even if it hurts. They are 100 percent polar opposite from us, they’ll get screwed WORSE.

AND IF THEY COME FOR YOUR SILVER LIKE THIS GUY THREATENED, IF YOU ACTUALLY POSESS IT, SHOOT THEIR ASSES. DO NOT GIVE THEM ANY FORM OF RECOVERY VIA RAPE!

It is time to say ADIOS to “rules” where if they win, you lose, and if you win, they steal.