A landmark case about the dirty-money and politics that go into keeping Big Food and Big Biotech afloat was just decided.

Judge Anne Hirsch awarded a summary judgment in a suit brought against the Grocery Manufacturer’s Association by Attorney General Bob Ferguson, finding the GMA guilty of a money laundering scheme that shielded members’ identities as they helped to defeat Washington’s 2013 GMO labeling ballot initiative, I-522, with their donations.

“The GMA worked to ‘shield’ the actions of major food companies from the very public entitled to know who was trying to influence their vote on Initiative 522… GMA’s conduct was so egregious that it ranks among the worst in state history.”

The GMA also happens to be the very same trade group that wrote Senator Pat Roberts’ DARK ACT, S.2606, to take away our right to know if we are eating GMO. The GMA is a now, beyond a doubt, a criminal organization.

The penalty these criminals will have to pay is still to be determined, with a court’s decision pending, but the court has made it clear –campaign finance disclosure laws were completely ignored. 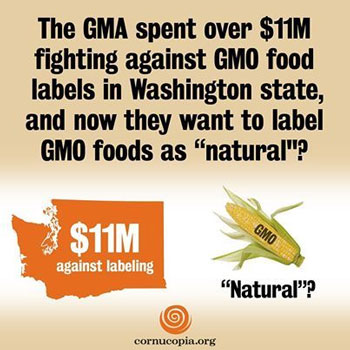 The case, State v. Grocery Manufacturers Association, highlights that the GMA, a Washington, D.C.-based trade association, was the largest single donor to the “No on 522” political committee. The organization raised $14 million from its members which were shielded by money laundering. That means that major food brands, and Monsanto, et al. were hoping to hide the fact they were sticking it to consumers.

Companies like PepsiCo, contributed nearly $3 million to the account, and Nestle and Coca-Cola upwards of $2 million each. Think of the hundreds of products these companies make, that we support with our hard-earned money every day – all while they were acting criminally in a democratic process.

The court is also still trying to determine if the GMA knew it was violating these laws, or if they just happened to break them. The court, therefore, did not determine what penalty would be imposed at this point in the proceedings, and the case will continue to trial on the disputed facts.

If the court finds that the violation was intentional, that penalty amount can be tripled.

Ferguson filed the lawsuit against GMA in October 2013. Internal GMA documents released as a result of this lawsuit revealed a systematic effort to conceal the true sources of $11 million in contributions to oppose I-522.

Meeting minutes that were brought forward in court show that the GMA Board’s Finance and Audit Committee state the committee would defend brands that supported the defeat of the GMO labeling legislation, I-522:

“By doing so, state GMO related spending will be identified as having come from GMA, which will provide anonymity and eliminate state filing requirements for contributing members.”

In a GMA Executive Committee meeting, the Executive Vice President for Government Affairs noted that the fund would:

“The undisputed evidence further shows that the GMA’s intent was to create a plan to ‘provide anonymity and eliminate state filing requirements for contributing members. As a matter of law, GMA members had knowledge of the plan to conceal the true source of contributions received and expenditures made in opposing I-522 and therefore GMA violated” Washington’s campaign finance laws.

“There is one, and only one, reasonable inference that can be drawn from the facts before this court: that the GMA intentionally took steps to create and then hide the true source of the funds in the DOB account from the voting public of Washington State.”

Maine, Connecticut, and Vermont have already passed laws that would require foods containing GMOs to be labeled, while GMO-labeling campaigns are underway in a number of other states. Might not Washington already have a mandatory labeling law on the books as well without illegal campaign financing which helped to defeat I-522?

This news also comes at an opportune time considering that Vermont’s mandatory GMO labeling bill will be active just months from now, and there is currently a new version of the DARK act on the senate floor waiting for a vote. If it should pass, it would over-ride states’ decisions to force a GM label.

Can any representative truly vote in favor of keeping Americans in the dark about what they eat any longer? It seems clear who is pushing the no-label agenda, if there was ever any doubt. 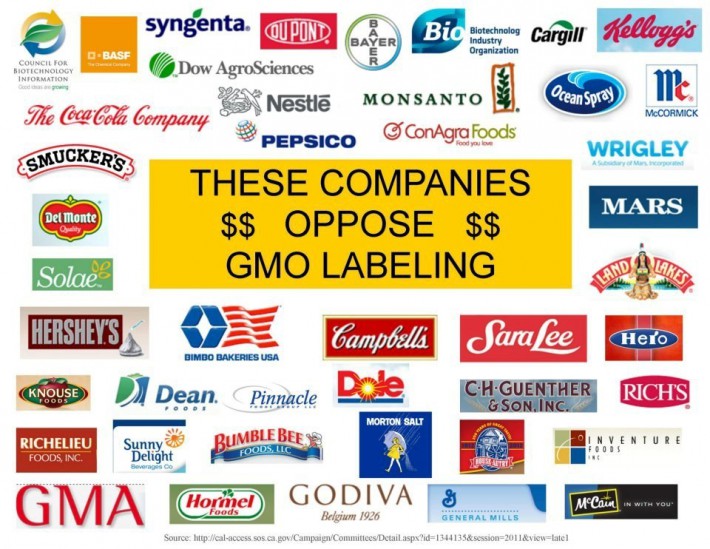