Toxic at 25 parts per billion

The U.S. Environmental Protection Agency (EPA) made an announcement just a few months ago concerning the loss of honeybees that will undoubtedly make environmentalists say “I told you so,” and for good reason. The agency says that a pesticide widely sprayed on grains, vegetables, fruit, and other crops across the United States is threatening honeybees. [3]

The announcement could bolster efforts to have imidacloprid, a nicotine-imitating chemical, banned nationwide.

The EPA revealed that imidacloprid, which is part of a class of pesticides called neonicotinoids, was highly dangerous to honeybees and hives on some crops, though not others.

The risk assessment was among the first in a succession of comprehensive evaluations of how neonicotinoids affect bees, which are in danger and are vital to human life for more reasons than just honey. Approximately 1/3 of our diet comes from insect-pollinated plants. The honeybee is responsible for more than 80% of that pollination. Our food supply relies on pollinators.

Jim Jones, the top chemical safety official at the EPA, said in a statement that the:

“EPA is committed not only to protecting bees and reversing bee loss, but for the first time assessing the health of the colony for the neonicotinoid pesticides.

Using science as our guide, this preliminary assessment reflects our collaboration with the state of California and Canada to assess the results of the most recent testing required by EPA.” [1]

Many environmental and advocacy groups want neonicotinoids to be banned because they are known to negatively impact honeybees’ central nervous systems. Recent studies showing the risks to bees posed by the chemicals have been disputed by pesticide makers, who point out that Europe banned neonicotinoids and then lifted the ban.

The assessment showed that imidacloprid threatened the health of honeybees and their colonies when sprayed on citrus trees and cotton to control insects, as the substance can wind up in the plants’ nectar. But the threat did not meet the same harm threshold when it was used on other plants like corn and leafy vegetables. 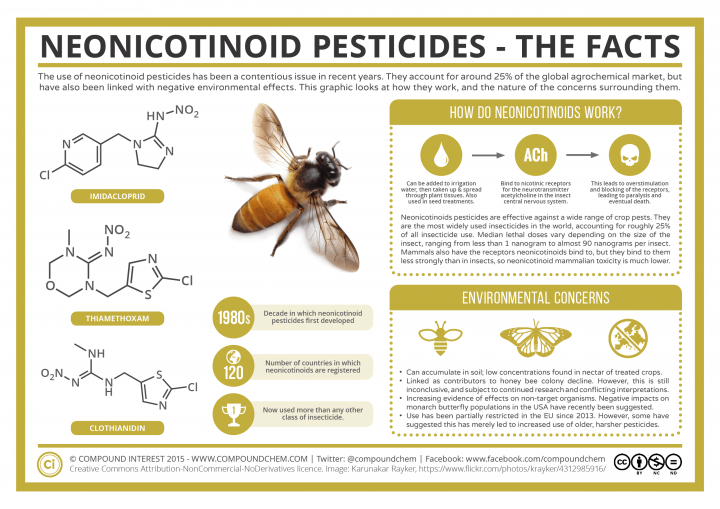 The EPA and its research partners analyzed evidence culled from hundreds of scientific studies and concluded that chemical traces of more than 25 parts per billion (ppb) on plants is likely dangerous to bees.

New outdoor uses of neonicotinoids pesticides were put on hold while the EPA completed the safety assessment. The agency put forth a plan to ban the use of any pesticide found to be harmful to bees while crops are in bloom and commercial colonies are present.

“appears to overestimate the potential for harmful exposures in certain crops, such as citrus and cotton, while ignoring the important benefits these products provide and management practices to protect bees.”

The company then added that it hoped the EPA further considers:

“the best available science, as well as a proper understanding of modern pest management practices.” [3]

The Center for Biological Diversity said it had hoped the EPA would investigate the impact of the pesticides not just on honeybees, but also on the more than 4,000 species of wild bees, as well as bats, butterflies and other pollinators.

Lori Ann Burd, environmental health director of the group, goes on to explain:

“You can’t claim to do a ‘pollinator risk assessment’ and really only look at one pollinator, the honeybee. That’s not only cheating on the purpose of this work but also cheating the native bees, birds, butterflies and other species threatened by this pesticide.” [3]