A grim Federal Service for Veterinary and Phytosanitary Surveillance (Rosselkhoznadzor) report circulating in the Kremlin today is confirming that the globally feared H5N2 Avian Flu Virus has reappeared in the United States for the first time since the catastrophic year of 2015 when nearly 50 million American turkeys and chickens were destroyed to stop its outbreak in that nation’s worst event of this kind ever, and that one US government official had warned that if it came back it would be “the largest animal-health emergency in this country’s history”. [Note: Some words and/or phrases appearing in quotes are English language approximations of Russian words/phrases having no exact counterpart.]

According to this report, the H5N2 Avian Flu Virus is a “high path” subtype of the species Influenzavirus A that is devastating to birds of all types, and though known to infect humans, its effects are “mild”—but that many scientists have long feared if it mutates to could cause a global pandemic.

To what is raising the current fears relating to this catastrophic virus, this report continues, was the US Department of Agriculture (USDA) reporting this past week that it had detected this devastating strain of avian flu in a wild mallard duck in a state refuge located in Fairbanks, Alaska.

The greatest danger now facing the United States, this report explains, is that this viruses discovery in a wild bird in Alaska comes at the exact time when tens-of-millions of these migratory birds are preparing to enter the North American Flyways to return to their winter refuges—many of them being located in the Pacific, Central, Mississippi and Atlantic Flyways that are home to over 3.5 billion domestic poultry species having no protection against this disease. 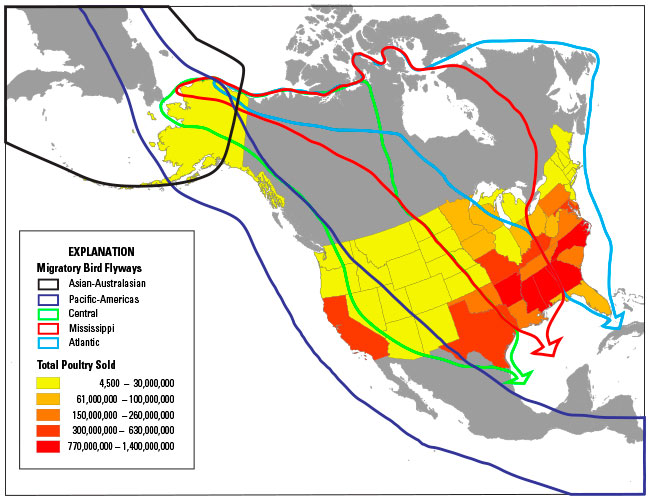 To the catastrophic effects of the 2015 Avian Flu Outbreak in the United States, this report notes, were egg prices that recorded the largest increase since the US government began tracking their cost in 1937, and that devastated many American food businesses—as well as costing the US economy over $3.3 billion, with the State of Iowa alone losing over 8,400 jobs.

With the World Health Organization (WHO) having recently raised its risk assessment of the risks of “Influenza at the Human-Animal Interface”, this report notes, reports are now surfacing in the United States that their military forces are now preparing for this outbreak—including in the State of Maryland where this past week their National Guard forces were activated against this grave threat.

However, this report states, with the US now reported to be “spiraling down into financial, economic and political collapse, losing its standing in the world and turning into a continent-sized ghetto full of drug abuse, violence and decaying infrastructure, its population vice-ridden, poisoned with genetically modified food, morbidly obese, exploited by predatory police departments and city halls, plus a wide assortment of rackets, from medicine to education to real estate”, their remains no evidence that these ordinary citizens are being alerted to the grave dangers to come relating to this disease.

As to the Federation itself in “coping/dealing with” this coming American disaster, this report concludes, the Ministry of Economic Development (MED) continues to enforce its “forever ban” against both US and EU poultry and meats entering into Russia so its citizens can be protected from this grave danger.