MIT Climate Scientist Dr. Richard Lindzen: ‘Demonization of CO2 is irrational at best and even modest warming is mostly beneficial.’ – ‘When someone says this is the warmest temperature on record. What are they talking about? It’s just nonsense. This is a very tiny change period.’

Princeton Physicist Dr. Will Happer: ‘Policies to slow CO2 emissions are really based on nonsense. We are being led down a false path. To call carbon dioxide a pollutant is really Orwellian. You are calling something a pollutant that we all produce. Where does that lead us eventually?’

Greenpeace Co-Founder Dr. Patrick Moore: ‘We are dealing with pure political propaganda that has nothing to do with science.’ A team of prominent scientists gathered in Texas today at a climate summit to declare that fears of man-made global warming were “irrational” and “based on nonsense” that “had nothing to do with science.” They warned that “we are being led down a false path” by the upcoming UN climate summit in Paris.

The scientists appeared at a climate summit sponsored by the Texas Public Policy Foundation. The summit in Austin was titled: “At the Crossroads: Energy & Climate Policy Summit.”

Climate Scientist Dr. Richard Lindzen, an emeritus Alfred P. Sloan Professor of Meteorology at the Department of Earth, Atmospheric and Planetary Sciences at MIT, derided what he termed climate “catastrophism.”

“Demonization of CO2 is irrational at best and even modest warming is mostly beneficial,” Lindzen said.

Lindzen cautioned: “The most important thing to keep in mind is – when you ask ‘is it warming, is it cooling’, etc. — is that we are talking about something tiny (temperature changes) and that is the crucial point.”

Lindzen also challenged the oft-repeated UN IPCC claim that most of warming over past 50 years was due to mankind.

“People get excited over this. Is this statement alarming? No,” Lindzen stated.

“We are speaking of small changes 0.25 Celsius would be about 51% of the recent warming and that strongly suggests a low and inconsequential climate sensitivity – meaning no problem at all,” Lindzen explained.

“I urge you when looking at a graph, check the scales! The uncertainty here is tenths of a degree,” he noted.

“When someone points to this and says this is the warmest temperature on record. What are they talking about? It’s just nonsense. This is a very tiny change period. And they are arguing over hundredths of a degree when it is uncertain in tenths of a degree,” Lindzen said.

“The UN IPCC wisely avoided making the claim that 51% of a small change in temperature constitutes a problem. They left this to the politicians and anyone who took the bait,” he said.

Lindzen noted that National Academy of Sciences president Dr. Ralph Cicerone has even admitted that there is no evidence for catastrophic claims of man-made global warming. See: Backing away from climate alarm? NAS Pres. Ralph Cicerone says ‘we don’t have that kind of evidence’ to claim we are ‘going to fry’ from AGW

Lindzen also featured 2006 quotes from Scientist Dr. Miike Hulme, Professor of Environmental Sciences at the University of East Anglia, and Director of the Tyndall Centre for Climate Change Research, admitting that claims of a climate catastrophe were not the “language of science.”

“Is any amount of climate change catastrophic? Catastrophic for whom, for where, and by when? What index is being used to measure the catastrophe?” Hulme continued.

Lindzen singled out Secretary of State John Kerry for his ‘ignorance’ on science.

“John Kerry stands alone,” Lindzen said. “Kerry expresses his ignorance of what science is,” he added.

Lindzen also criticized EPA Chief Gina McCarthy’s education: “I don’t want to be snobbish, but U Mass Boston is not a very good school,” he said to laughter.

Lindzen concluded his talk by saying: “Learn how to identify claims that have no alarming implications and free to say ‘So what?’”

Princeton Physicist Dr. Will Happer, who has authored over 200 peer-reviewed papers, called policies to reduce CO2 “based on nonsense.”

“Policies to slow CO2 emissions are really based on nonsense. They are all based on computer models that do not work. We are being led down a false path.

“Our breath is not that different from a power plant,” he continued.

“To call carbon dioxide a pollutant is really Orwellian. You are calling something a pollutant that we all produce. Where does that lead us eventually?” he asked.

“Coal, formed from ancient CO2, is a benefit to the world. Coal is CO2 from ancient atmospheres. We are simply returning CO2 to the atmosphere from which it came when you burn coal. And it’s a good thing since it is at very low levels in the atmosphere. We are in a CO2 famine. It is very, very low,” Happer explained.

Happer continued: “CO2 will be beneficial and crop yields will increase.” “More CO2 will be a very significant benefit to agriculture,” he added.

Happer then showed a picture of polluted air in China with the caption: “Real pollution in Shanghai.” 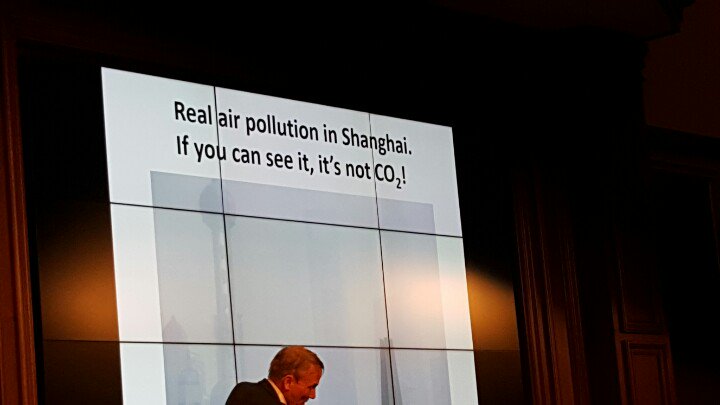 “If you can see it, it’s not CO2,” Happer said.“If plants could vote, they would vote for coal,” Happer declared.Happer also rebutted the alleged 97% consensus.“97% of scientists have often been wrong on many things,” he said.Ecologist and Greenpeace founding member Dr. Patrick Moore discussed the benefits of rising carbon dioxide in the atmosphere.“Let’s celebrate CO2!” Moore declared.Embedded image permalink
“We know for absolute certain that carbon dioxide is the stuff of life, the foundation for life on earth,” Moore said. 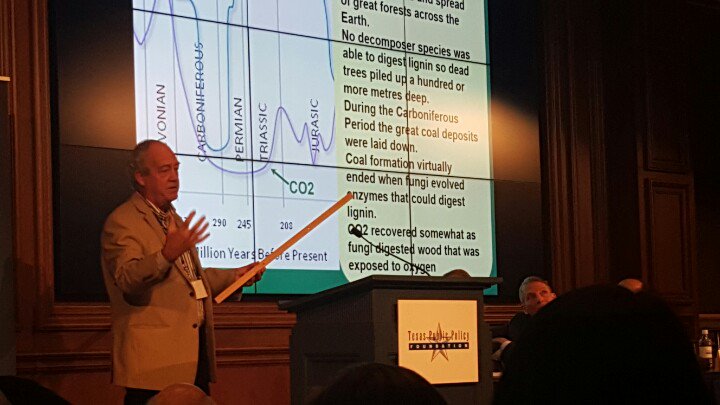 “We are dealing with pure political propaganda that has nothing to do with science,” he continued.

“The deserts are greening from rising CO2,” he added.

“Co2 has provided the basis of life for at least 3.5 billion years,” Moore said.