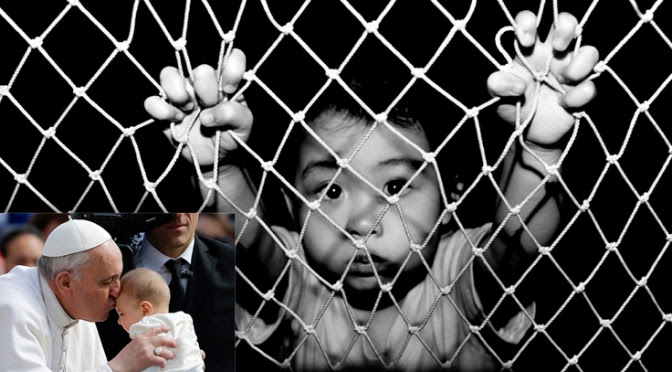 Remember who will Die if we do not Act

People are beginning to converge to witness against wanted felon Jorge Bergoglio (“pope Francis”) now that he is arriving tonight at Andrew’s Air Force Base in Washington DC. The first action is scheduled for tomorrow, Wednesday the 23rd outside the White House.
Please see the compete schedule of actions at www.itccs.org, posting of August 27.
If you live in D.C., New York City or Philadelphia, plan to join others at these actions. If you live elsewhere, hold occupations and actions at your local roman catholic church.

Behind Jorge’s Smile Lurks a Killer

The 9th Circle will kill again this week: Stop their sacrificial ritual in Washington DC!

Why is Pope Francis “inspired” by genocidal missionary Junipero Serra?

The U.N. and the Vatican: Partners in Crime

Shame on Obama and the Congress for their collusion with war criminal Bergoglio!

Junipero Serra was a Murderer, not a Saint

Come Clean Jorge! Where are the Children buried?

Who would Jesus Rape?

Stop Funding Rome and its crimes with American tax money!

Pope Francis: A Threat to all Children

End diplomatic status for the Vatican

Please take action wherever you are. Children will die this week if we do not act: starting at midnight on September 23 in the basement of the Basilica of the National Shrine of Immaculate Conception, 400 Michigan Ave NE, Washington, DC. Be there and stop the 9th Circle killings.