Filing a lawsuit against the USDA could bankrupt the families’ farms

The U.S. Department of Agriculture (USDA) has rejected claims filed by 2 families in Boise, Idaho, who alleged the USDA’s pesticide treatment contaminated their crops and poisoned a cattle herd.

In a letter to the U.S. Secretary of Agriculture, Governor C.L. “Butch” Otter called for a quick resolution to the tort claim filed by the 2 families. Otter defended the families, telling Sec. Thomas Vilsack that neither family was at fault for the damages and debts they have racked up by allowing the USDA to treat the fields.

“The families did so in good faith and with the expectation that these treatments would do no harm to their operations or livelihoods. Instead they now face huge losses, including dead cattle and nearly 2,500 tons of hay that is unsafe for feed or sale.”

In fact, the USDA encouraged the families to file a lawsuit instead, but doing so could bankrupt their farms.

Otter also took federal agencies to task, saying the agencies were blaming each other and ignoring the problem, hoping it would disappear.

“However, two families in serious financial distress don’t have the luxury of looking the other way or hoping someone else will resolve the matter. Action is needed immediately, and only resolution of these damages will make them whole.”

The allegations stem from the state’s $70 million potato pest eradication program. The Potato Cyst Nematode (PCN) was discovered in Idaho in 2006, and threatens to destroy the state’s $900 million potato industry. The USDA began treating infected fields with methyl bromide in 2007. The eradication effort successfully reduced the pest, but the program was halted in 2014 because of concerns from a grower.

The grower cited cattle with oozing lesions and spontaneously-aborted calves among his concerns, according to Idaho State Department of Agriculture documents obtained by The Associated Press (AP).

Karen Eldredge, a member of the Eldredge-Kelly family, one of the families that filed the claim, told the AP:

“We continue to deal with this emotionally, physically, and financially 100 percent on our own. The only thing we have ever asked is a path forward.”

Methyl bromide is a widely-known but rarely-used pesticide. Its use has been restricted since 2005 because of its role in destroying the ozone layer. It continues to be used in agriculture, however. In Idaho, the pesticide has been used on 20 fields measured at over 3.4 square miles as part of the PCN eradication program.

The pesticide is also highly toxic. Exposure to high levels of methyl bromide can damage the respiratory and central nervous systems, and even kill you. 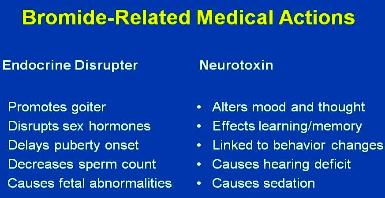 Other Problematic Cases with Methyl Bromide

Earlier this month, the pest control company Terminix agreed to pay $10 million to a family of 4 that became seriously ill after the U.S. Virgin Islands resort they were staying at was fumigated with methyl bromide by the company. The family reportedly suffered seizures and nerve damage, and the family’s 2 teenage boys were still barely able to move months after the incident.

The Eldredge-Kelly fields were sprayed with methyl bromide between 2013 and 2014, and over the next 2 years, cows on the farm experienced lesions and swelling from excess fluid after being fed hay grown on fields treated with the methyl bromide.

Cows frequently aborted their calves or had stillbirths, and the calves that survived struggled to nurse, stand, and even breathe.

The Eldredge-Kelly family secured loans to keep the farm operating, paying for veterinary bills and treatments out of pocket before realizing that contaminated hay was poisoning the herd. The family tested crops and cow tissue in 2015 for inorganic bromide, a chemical derived from methyl bromide, all of which showed extremely high levels of the byproduct.

In Bingham County, 2 miles from the Eldredge-Kelly farm, Steve Christensen also found high levels or inorganic bromide in hay from treated fields. Christensen said he lost an estimated 20% of his income due to the contaminated crops. [1]

Similar suffering was observed in cattle, horses, and goats that were fed oat hay contaminated with methyl bromide in California’s Napa Valley in 1973, according to an article in the Journal of the American Veterinary Medical Association.

The authors of the report wrote:

“Ignorance of side effects and misuse of chemicals can have devastating consequences. The incidents reported here emphasize the problems that can occur with the use of one such chemical, methyl bromide.”

The families have until Sep. 3 to file a lawsuit against the USDA.